Nerve Dumps, Noon Booze, and Wind Dancing: I Had an 18-Minute Date With David Lynch. 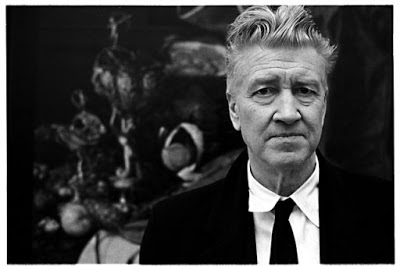 I have been some form of a journalist now for over 17 years. Aside from the actual writing that comes along with being a writer, which is a thing I compulsively have to do, and would do, even if I'm not being paid for it, which I'm often not, my favorite thing about being a journalist is that I can think of almost any person on earth who I want to interview, reach out to their publicist, and then interview them. This is a fantastic thing, and is very exciting, right up to where an interview is confirmed, at which point my entire body is seized upon with nerves that make me a sweaty, shitting, obsessive wreck until the minute the thing is over.

For the most part, every interview I've conducted has gone well, aside from a few dicey moments. A brief run-down of these moments would include the time I was waiting for a phone call from Sandra Bernhard, and she called early, while I was sitting on the toilet, and I had to stall, and then rush out and conduct the interview in the bathroom hallway, with all manner of flushing heard in the background. There's also the time I interviewed Carrie Brownstein from the phone at the K Records office, where I worked at the time, and my pre-call illusions of us being best friends/live-in lovers were dashed when after minute one of talking to her it was revealed that she not only didn't think my banter was charming, but really seemed to not like me as a person. I went home and cried, and I think also ate a whole pizza. There's also the time I interviewed Tori Amos in person, and when we walked up to the conference room where the interview was set to take place, found that a staff meeting was being held there, which caused me to rush in - red faced and shaking - and ask everyone to please leave, which they did, while shooting me daggers from their eyeballs. Aside from those times, everything has gone well. You would think these experiences would lead to the act of interviewing someone becoming like second nature, as comfortable as putting on sweatpants at the end of the day, but nay. Every single time I have to interview someone. Every. Time. I feel like I'm going to die. I've crafted a few rituals that seem to help though.

Today, at 1:20PM EST, I interviewed the person I would consider to be my favorite person in life, aside from my girlfriend. That person is David Lynch. I have a list I could run down of all the things I've thought and done that have to do with Lynch, but it would be too long. I will say that I've seen every episode of Twin Peaks as they ran for the first time on TV, have spent the weekend at the Maharishi University of Management in Vedic City Iowa that Lynch funds, have gone to the Twin Peaks Festival in Washington State and visited all the locations of the show while there, own all relevant books, have seen all his movies - even going so far as to fly back home to Riverside (the Inland Empire) where I spent my teen years, to see Inland Empire, yadda yadda. I'm a fan. I'm a fan who spent from 7AM to 1:15PM today shitting her face off. I also did the following things:

- Shit my face off.
- Exercised.
- Smoked a cigarette.
- Made a vodka cocktail at around noon because my hands were shaking and my throat was closing up.
- Did this random wind dance where I swayed my body around and raised and lowered my arms in an effort to self-sooth and release tension.
- Lit incense.
- Turned the TV on, and then off.
- Calculated the area of my apartment that was the sonically safest, and furthest from any street noise, electrical interference, and sounds of my neighbors beating their dog.
- Closed my eyes and breathed in and out.

I like to think of interviewing a person as being on this weird little date. You select a person you're interested in, approach them with your intentions, and then wait to see if your intentions are accepted. If they aren't, you are sad, if they are, then you set a day and time that will be a day and time just for the two of you to spend together. The day before your "date" you fixate almost 100% on that person, snoop around on the internet to find out every last detail about them, watch all their stuff, listen to their voice. It's extremely intimate. And then the day comes that brings the two of you together. You're nervous, maybe they're nervous too. You want to seem cool, but you also want to express, if not in words, then in tone, how much you care for them. You try to get as much out of the time as you can, and then it's over. But you'll always have that time. For a moment in life, it was just you, and them, and I've always felt that that's a really special thing.

I just talked to David Lynch for 18 minutes, ate a cracker, and now I'm gonna cook some noodles and eat them. I interviewed him for a publication that is going to pay me money, and as soon as they print what they like, I'm gonna post everything from the interview that didn't get used here, so keep an eye out for that next week.

@WolfieVibes
Posted by Unknown at 1:51 PM