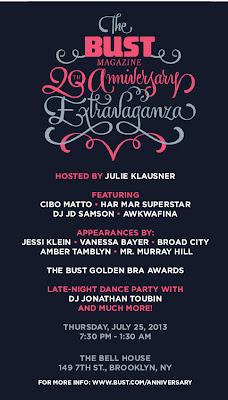 Bust is celebrating their 20th anniversary on July 25th with a huge party at The Bell House in Brooklyn. There's going to be drinking, dancing, bra snapping, and all of the rest of it. The end of the night will most likely close out with everyone doing Wiccan rituals over a bedazzled cauldron while eating frozen hot chocolate. It better, or I'm not going. Just kidding, I wouldn't miss it for the world!