How Soon After You're Possessed by the Devil Can You Have Sex?

Sometimes I think about having a baby. I'll think about it more and more, depending on how frequently my brain will tell me "you can't have a baby with that dried up, old pussy, and only one ovary." (Fun fact: I only have one ovary.) I'll also think about it when I see a cute alt-mom dancing with her kid at a Breeders reunion show, or If I daydream about how fun it would be to talk to a little weird face about dinosaurs and poop monsters. So much about having a kid seems awesome, apart from the fact that it's fucking disgusting. I don't know if you've ever watched a Youtube video of a baby being born, or heard stories from people who have given birth about how the act of doing so completely shreds the shit out of your hoo-hoo, like ripping things where they shouldn't be ripped, messing up your flaps, and causing a poop to happen when it shouldn't normally happen. If you haven't heard these very specific stories, I bet you have heard about people debating when, exactly, it's safe to have some sweet penetration after you've pushed a living human being out of your penetration zone.

There are lots of things on the internet about this: 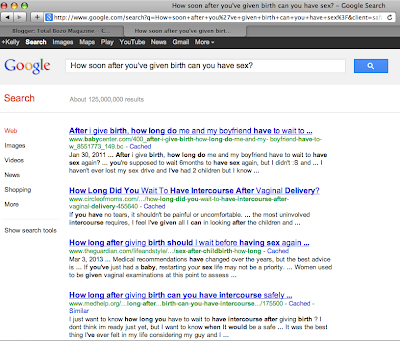 What's surprising to me is that there's very little to be found on the internet detailing when, exactly, it's safe to have sex after you or your loved one have been possessed by the devil.

When I Google for answers, different things come up that may touch upon the subject, but nothing specific. Nothing that would be considered clearly, and plainly, helpful. See: 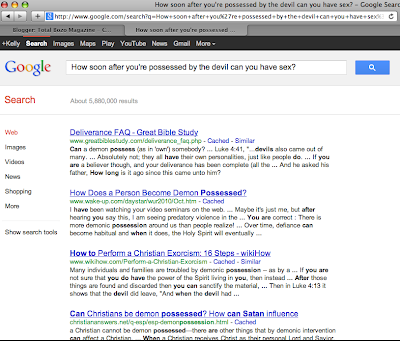 It's surprising that there haven't been numerous books and/or relevant blog posts about this matter because, and I can't be the only one to think so, having a baby and being possessed are very very similar, at least in terms of what they do to your body, provided of course that "your body" is a woman's body.

When a person is possessed, their eyes get weird, their hair gets wild, they start saying insane things and making loud demands, and usually various bumps and marks will appear on the stomach as a unseen force manipulates their flesh from the inside out. Their body is no longer "their" body, but host to something new. Same exact thing with being preggo. In both cases, be it a pregnancy, or a possession by the devil, the question on the minds of everyone involved in the situation is of course going to be: "well how soon before I get to that booty and take it to the bone zone?"

Maybe it's a situation where once you catch a baby, or a demon/the devil, it's best to wait until you're perfectly certain that you're in no danger of catching, or spreading another one. Apparently new life intel has revealed that demons can be sexually transmitted, so now that we've got that AND HPV to worry about, AND babies, I think maybe we should just all keep our pants on and wrap our lower halves in Ziplocks and Scotch tape.

A group of educated nuts on the internet have the following to say about avoiding catching a baby, or a demon:

"There are many ways to be infected with a demon, say the girls, but the biggest causes are sexual abuse and drug addiction. It is also possible, they say, to catch a demon by having sex with prostitutes, being physical or emotionally abused, and by sinning."
Don't sin. Don't do sex. Don't have a demon.

The inspiration for this post came to be after my GF and I saw The Conjuring last week. After seeing the film, which features some pretty intense possession scenes, my GF asked me how long I thought it would take for a couple to feel normal enough to have sex after one of them had been possessed. She was mainly troubled by the idea of being close and intimate with a face that you had previously seen look monstrous and scream at you about juggling dead puppies in hell. I told her that if I were in such a situation, with her, I'd wait a few weeks and then ease back into things with the tender, healing love of doggy style.

Don't sin. Don't do sex. Don't have a monster face.