The Riley Cooper Apology We Can Live With 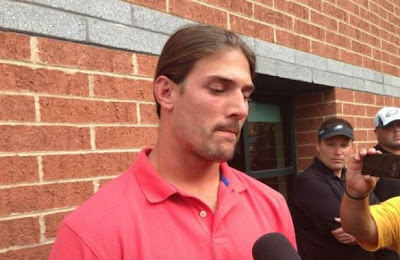 So Philadelphia Eagles wide receiver Riley Cooper, a white guy, appeared on a recently surfaced video saying the-word-that-begins-with-n-and-ends-in-igger-which-I-must-hypenate-euphemistically-just-so-we-make-laboriously-clear-that-I-do-not-condone-the-sentiment-behind-it. The word conveys an idea so stupid and wrong and unjust and etcetera that we all must run scurrying in the opposite direction lest any semblance of association taint us for the rest of our lives. As it should be. It’s that bad of a word.

Riley Cooper used that word because he is an idiot, and he's an idiot not because he “got caught” or because he “stands to lose a lot of money” or because he “works with a bunch of black guys,” but because that word represents an idiotic thought, and it can’t even form on your lips unless your brain is acting like an idiot. Being an idiot is and should be forgivable even as use of that word should be a cause for shame and humiliation. Riley Cooper should feel bad. He should reflect on the extent to which his current feelings of shame and humiliation and fear for his livelihood dovetail with the feelings of the historical recipients of the slur he used. And he should learn and grow and become a person who doesn’t use that word because he doesn’t think that word because he now feels too much empathy to be able to. But who knows if that’s actually going to happen. He is an idiot, after all. It might be a tall order.

In the meantime, he is apologizing. We are getting sadly used to this phenomenon. Person in the public eye gets caught doing something idiotic, issues an immediate and vociferous apology that always seems insincere because it’s a reaction to getting caught and not to any actual epiphany about the wrongness of the act. This apparent insincerity is compounded by the wording of these apologies. They are always deliberated on by a team of professional handlers, and hence always seem stilted and overly cautious and hyper-articulate and totally at odds with the actual personality of a person who would commit the acts the person is currently apologizing for.

You are probably familiar with the speech. “To fans, members of the organization, for anybody I hurt or offended, I take full responsibility, I am seeking help to come to terms with, etcetera etcetera.”

The public apology is a big repeatable charade. They pretend to apologize. We pretend to forgive. Life goes on and we all grow more wary of each other. We will never know the extent to which anybody in the public eye is actually sorry for doing a stupid thing. And also we probably will never care. It’s not like Riley Cooper is a family member or anything. We don’t need to forgive him for this. Most of us didn’t even know who he was until this happened. We only know now because it’s such an easy thing to condemn. “N-word bad” is a total Frankenstein no-brainer. The sports media loves to condemn things that are easy to condemn. Look at me for example. Even me. And I’m nobody.

Anyway, here’s what these people would say if their apologies were about being sorry and asking for forgiveness rather than damage control and money:

“We’re here today because I’m an idiot. I did something that only idiots do. I am here to apologize for the idiotic thing I did. I should not have done it. I did it, even though I could just as easily have not done it. I went ahead and did it anyway. I don’t know to what extent I thought to myself ‘hey idiot, maybe don’t do that’ before doing the thing I did, but it was clearly not enough to stop me. I am an idiot, but even an idiot should not do the thing I just did. I would like to apologize again for doing it, and I’d like to apologize additionally for being a big enough idiot to even think of doing it, and I’d like to apologize for not even stopping myself out of a basic sense of manners and decency, which are really the first things any idiot should keep in mind.

“Furthermore, being an idiot, I didn’t know how idiotic this thing I did was until somebody who’s not an idiot told me. Can you imagine being that big of an idiot and not even knowing it? That’s how big of an idiot I am. Now my lifestyle and livelihood are in jeopardy because I did this thing and because everybody knows I did this thing. That scares me. But what scares me more is that I could be so big of an idiot and not think of myself as an idiot. That should scare you people too. Because if I’m this big of an idiot, who else out there is also this big of an idiot? Maybe the CEO of a multi-billion dollar oil company, maybe your next door neighbor, maybe even you. It’s worth investigating. I didn’t know I was an idiot until this happened. It boggles my mind to even think about it. My mind boggles easily because I’m an idiot.

“It’s my fault I did what I did. And it’s my fault I’m an idiot, too. I mean it is and it isn’t. I was born and raised an idiot, so there’s that. And my only job in life is to catch footballs for a living, so it’s not exactly shocking that I might be an idiot. But everybody should be expected to live and function in society, and part of that social contract should be occasionally asking yourself if you’re too big of an idiot before you do something like what I just got caught doing. I failed to do that. I was too big of an idiot.

“Now I am here asking you to forgive me for being an idiot, which should be easy to do, because everybody’s an idiot sometime. I’ve been told by my handlers that all humans descended from apes in our not too distant past, and looking at an idiot like me, I can totally believe it.

“I am also asking you to forgive me for doing the thing I did, which is much more difficult, because what I did wasn’t just idiotic, it was also mean and hurtful and unjust and wrong. I was too big of an idiot to consider that until you people showed me, and for that I am grateful, and deeply, deeply sorry. I have to live with myself for the whole rest of my life. I don’t ever get to be anybody else. And now that I’ve done this, it’s not only the only thing you’ll ever think of when you hear my name, it’s going to be in the back of my mind, too, forever. Gnawing at me. I will never be able to escape it, and don’t want to. That would be irresponsible of me.

“I will own this, and will continue to own this, forever. I will accept the shame and humiliation of having done this as the only sign that I am a redeemable human being, and will therefore no longer be capable of experiencing joy without a tinge of regret attached for the rest of my life. I am telling you this not to communicate how sorry I am as a plea for your sympathy in a cynical last ditch effort to preserve my livelihood and lifestyle, but to explain the reality of my current situation. It’s possible to fuck up so bad you can’t unfuck up, and that’s what I’ve done.

“Please let me play football. I promise to treat it like the gift it is from now on. Thank you.”
@itisbenjo
Posted by Ben Johnson at 5:03 PM