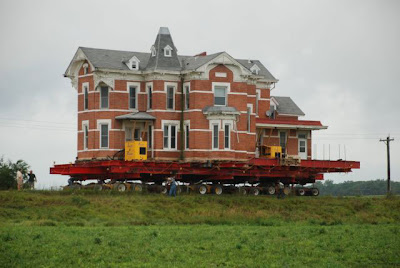 I have been in the process of moving hell for the last few weeks of my life. “Hell” is a strong word. “Hell” implies eternity and, you know, burning in a lake of fire, or standing on a train platform in Brooklyn in August waiting for a G train you’re not sure will be coming while the walls and floor and all available surface areas are sweating some horrid brown goo you’re sure is filled with Hepatitis, and you don’t know who you are or why, and time doesn’t exist except to mock you.

I’ve been listening to the radio a lot. Classic rock radio. WLUP 97.9 The LOOP. Rock and roll hoochie koo. I like classic rock radio. I have heard “The Boys Are Back In Town” four times in the last week, and I was happy about all of those times. Once I was pretty sure I heard an Eddie Money “rock block” that consisted of “Two Tickets To Paradise” twice in a row. I have no way of knowing. Classic rock radio is basically “Two Tickets To Paradise” twice in a row for the rest of your life. “I think they just played that” is a hard thing to notice when you’re driving a rental van back to Home Depot after a thirteen hour shift of doing everything the most difficult possible way.

I might have also been hallucinating at the time. My drug of choice these days is exhaustion. My muscles have been used. By me. To move things and generally interact with the world at large. They resent it. They are screaming like toddlers who stayed up through naptime and now are on a destructive negative energy burn. I am smoking cigarettes without using my hands. If the smoke stings my eyes, it’s a relief. I am pretending I am a real man who can live like this. I’ve got Two Tickets To Paradise, and I can carry a dresser all by myself.

The apartment I am moving into with my girlfriend is in a neighborhood where people stay until they die. White people and their children. People who get up at 6:00am so they can run on purpose. People with athletic dogs to match their own sense of boundless enthusiasm. We go get life now? Uh huh yeah we gonna go get life now boy. Yeah, that’s right, boy, life. Immaculate gardens meticulously tended through regular, meditative hosings. Food is for nourishment. Clothes are for protection and cover. Walking is for walks. Driving is for drives. Trains are for going to work. Work is for work. Art is for looking at. Music is for listening to at a reasonable, neighborly volume through outdoor speakers. Reading is an adventure. Smiling is an inadvertent pastime. The human body is a machine of joy. Time moves forward only because it can’t help itself, and we forgive it. Things are what they are in themselves alone. It is the kind of place that makes you feel guilty for flicking a cigarette butt, and for having smoked a cigarette in order to quell an inner voice which in essence repeats “FUCKFUCKFUCK” all day every day. It is confoundingly peaceful.

I feel like a guy. Guy in a green shirt, walking. Guy in blue sneakers and brown socks and mesh shorts buying gum at 10:30pm with a $20 he wants to break. Guy assembling a table while the Red Hot Chili Peppers sing about taking it on the otherside.

My girlfriend is freaking out about where to put things, because she wants to feel at home, because she wants to relax, because she is freaking out about where to put things. I know this loop. It feels like a straight line from the inside, narrowing through a collapsing funnel, a star field in your line of vision imploding into a singularity (the book shelves must be moved NOW) and then a supernova of migraine. I want to reach in and help her, and show her the world of the outside neighborhood where everything is falling because in space you don’t weigh anything because you’re falling, and it feels so much like floating that if you have enough oxygen and a protective enough suit you’ll feel so fine even late-career Red Hot Chili Peppers is okay.

I can’t always reach her safely. If they won’t let you pull perpendicularly to the flow, sometimes you have to wait on shore and let the rip tide pull them all the way around. This is called “faith” or “trust” and I’m giving it a try.

After seven years of living alone, I don’t feel like a cornered animal as much anymore. I’m not fighting for scraps and eating them on the spot like a starved beast, padding fearfully through the unfamiliar alien city, a coyote somebody swore they saw on 93rd street. I look at the things I was thinking as recently as last month, and they’re just big piles of dirt somebody loaded near a highway because it was dirt and it had to go somewhere.

My records are packed in boxes in an area of the apartment we are calling Guy Boyman’s Room because the phrase “Man Cave” has the rank stench of death attached and we want this to be more like a guest room with records in it. I have had no urge to unpack the records, partly because there is more high priority work, and partly because they are the collected rotting artillery from a bygone era of warfare. I was fighting inward, trying to find the perfect, exact me, when the perfect exact me is out in the world and not somewhere in the deepest recesses of immersive misanthropy. I was using these little platters to scrape away at the bottom of a muck pit instead of looking up and out and using my muscles for once and being a guy with half a Diet Coke in his cupholder, smoking a cigarette in the Home Depot parking lot while wearing a plain white t-shirt so stained and sweaty it looks as if he’s spent his day climbing out of a muck pit.

Except that email update Brenton Wood Oogum Boogum LP is looking tempting even at $30. Guy in gray slacks who likes music.

You can learn going inward, but every discovery is a fish hook in your skin. You have to cut the line and pull it through. You can’t pull backwards without getting stuck worse. You’re in the back of a police car because you’ve done something horrible. You have to cut the line to “I am a good person,” and the half the hook that says “I can ever drink again,” and you have to push the barbed regret through the other side of your cheek knowing full well it’s going to hurt like hell, and then you have to live with the immediate hole and adjust to the ugly scar tissue which will gradually fill it. You do this often enough and bad enough, with increasing caliber hooks and 500 pound lines, and eventually the only remaining lesson is “maybe don’t swim here.”

Now I am through, and I have moved, and I am me but in a different place and with a different person. Take it on the otherside. And we are together and that’s what matters to me right now, and the looping hell of being alive will be a guy doing his taxes and a guy filling out a rebate form and a guy trying to return a bookshelf to Pier 1 without a receipt and a guy and a girl doing this and that, one moment at a time, forever, and hopefully not a stack like how it feels sometimes before the stars explode in your head and you don’t know who you are or why.