What Are You Doing? I Want To Die. 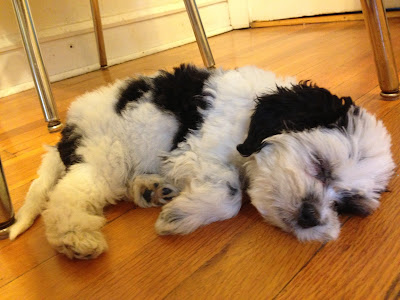 I’ve noticed your girlfriend really loves me a lot. She would be devastated if anything happened to me, huh? Even though I love to shit on the floor, huh? Interesting.

I’ve heard the two of you arguing sometimes. Gosh, it must be stressful to move in together and figure out how to live with another human being. I hope I’m not adding to that stress at all. FYI, you should walk me at 5:30am instead of ever sleeping. And while you're doing that, even though it's 5:30am and you were just dreaming like 5 seconds ago, pay extra attention and make extra sure I don't eat any poisonous bird poop. Bird poop is poisonous to puppies like me. You heard that somewhere. Anyway, all I want to do is eat bird poop, get sick, and die. Hey, I just thought of something: maybe that will help the situation with you guys. A dead dog. Me.

Maybe if I died you guys would be more relaxed, and nobody would blame anybody else like you did the time that adhesive hook ripped the paint off the wall. Same situation as the wall hook thing, except for a dead dog? No way that’s gonna cause problems. Everybody loves it when a puppy dies. I should know. I’m a puppy. And I am trying to end my own life with every breath I draw.

How am I gonna do it? I already mentioned power chords and bird poop. I’ve also got this thing going with the street. I want to just run out there. It looks awesome out there in the street. You guys seem like you don’t want me to go out there for some reason, but that only makes me want to do it more. Leave the door open even a crack and I’m running right out into the street. To get killed. By something. My mind can’t even conceive of what might kill me if I go in the street, I’m just going with my gut here. Go in the street, something might kill me, that’s good enough for me.

I just thought of something. What if I don’t die? What if I’m merely maimed? That would be great. If some sort of thing, like something heavy on a shelf with a chord attached that I could pull on, could fall on me and crush only half of me. I’m just spitballin’ here. And then there would be super expensive emergency surgery that you would have to pay for, and then I would have to be in one of those doggie wheelchairs for the rest of my very long life, which would require constant care and attention and also be expensive as shit. Maybe I could also be one of those dogs you have to squeeze the poop out of. Something awful and humiliating like that would be good. For years and years.

Oh man, I just thought of the best part. This maiming would happen on YOUR watch, Ben Johnson, so every time your girlfriend looked at me pathetically wheeling around, a crippled, broken puppy, she would think of you and your negligence. I'd be like a constant reminder of how much she hates you, building daily until finally she goes on a crazy rampage of sexual revenge, fucking you boss and your dad and your best friend. That would be totally out of character for her, but if I crippled myself REAL GOOD in just the right way, I bet that’s just what she would do. I want that for you. I hate you with a passion, and I am trying to destroy you. Never forget this. I am willing to die in order to ruin your life.

What are you doing? Can that kill me? I want to see if this can kill me. No? It’s just toothpaste? Maybe it will kill me. I will eat it just in case. Look how cute I am. I am trying to die.

@itisbenjo
Posted by TOTAL BOZO at 9:57 AM