An Evening That Has Happened 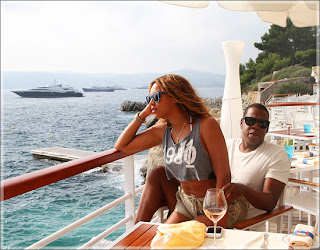 She has a routine, and she hates to break it because luxuriant as it has become the routine grounds her in herself. She has a feeling of belonging, of care, of simplicity. Egyptian cotton pajamas and slippers. Hair in the same old headband since Houston. Hot water. Soap. Cold water. Chanel Sublimage. She is sitting at her antique cherry wood makeup vanity for the final stage of her ablutions. She hums indistinctly. She is total.

He, too, is total. He leaves his nightcap uncompleted, enough being enough, while watching NBA Tonight in the softest leather chair ever built. Tonight he has been interrupted, as is customary, by only a couple of business calls, people desperate for his considered opinion on this or that delicate matter. For each minor intrusion he stands while holding the phone, a habit he has formed recently upon the unknowing recommendation of Warren Buffett, who once mentioned at a cocktail reception that standing for late calls tricks his brain into a state of alertness. The calls are not important, but not receiving them would at this point be an affront. Bump my three o’clock with Ne-Yo. Trinidad James is the priority right now.

These are the distractions a man must burden himself with if he is to control his destiny, he tells himself. His Cohiba burns evenly as the Spurs cutely rotate their perimeter defense to hold off a late rally by the Rockets. Splitter on Delfino, bigger but just as quick. Probably waited all game to spring it. That’s why Pop is the man. Note: mention it if you get a chance. Or not.

As he enters the master bedroom she smiles contentedly. He smiles back on his way through to the bathroom. Her humming continues absentmindedly as she brushes, filtered through the impatient, masculine sound of his nightly preparations. Whirring of electric toothbrush with oddly boastful urine stream undercurrent, the whip-sound of faucets turned all the way on and all the way off in rapid succession. A tense urgency she recognizes and deftly renders a decision on.

He emerges and leans on the doorway. Plain white t-shirt and silk boxers. He’s abandoned the bathrobe and the pajamas recently. Though she’d prefer something a little more presentable, she’s glad. Those were affectations and this is him, the full man. He watches her, the full woman. His smile is playful and his gaze is murderously intense. She knows this look. It is more effective than she wants to admit. She reexamines her decision. It will hold, and it will need to hold, it will be necessary this time. Unfortunate, maybe, but necessary. We are both full. We can be full this way or that way, and tonight it’s this way, just to show I have a say. Done right it will take nothing away from either of us.

“You are a beautiful woman,” his voice slides from an initial croak into a velveteen sales pitch. “I told you I don’t like it when you smoke them cigars,” she replies, adding the Houston on “them” but with her voice softening on “cigars” enough to take the conviction off. She doesn’t actually care. Message received in any case.

He pauses. Drop it here and you’ll be fine. Continue and it’s just bluster, and you’re too old for that. Maybe too wise, not too old. That’s the way it used to be and this way is better. But there she is, and she is beautiful, and, dammit, mine. As mine as I am hers, and I’ve been hers. He thinks about Warren Buffet’s advice, how it cuts both ways, how that’s probably not as much of a problem for Warren Buffet. Now THAT is too old. He chuckles, dryly, and sits on the bed.

He walks towards her and inhales deeply and holds her, which she allows for a token moment before swatting him away and reaching for her Kenabo Sensai Premier. She applies it judiciously and turns to him with a sly “you’re incorrigible” grin.

“I’m Jay-Z,” he says flatly, standing with his hands at his sides. He considers adding “maybe I’ll give Kanye a call and we’ll go see who’s happy to see us,” but Kanye is in Vienna, and it’d be an empty threat anyway. He’s tired of Kanye. Even Kanye is tired of Kanye. Almost. His mind goes through the internal rolodex. Who’s in town on his level. What gyms with who in them for hoops at this hour. What procedures must be taken. If he has the energy or the need for a surprise visit to Brooklyn, equal to or surpassing his current physical energy, his current physical need.

“And I’m Beyoncé,” she replies, and with the arch in her eyebrow implies “need I remind you of my discography’s lyrical content?” But the name alone is enough. It is her name. Her real name. She’s got nothing to hide.

Their eyes, locked in challenge, soften. Both smile, knowing they will make love in the morning. The morning is best, anyway.