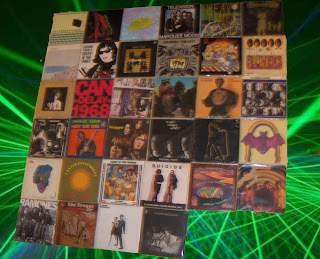 Today is my 33 And A Third birthday, so I wrote a list of my favorite 33.3 records that I own. And then I became paralyzed with fear. This is not something “serious critics” usually do. Mostly because nobody gives a shit and nobody asked and it’s bad, boring copy. Also it leaves me vulnerable to criticism, and every “serious critic” hates that more than ANYTHING. If you wanted to nitpick me and call me names based on this list, you’d have several very good angles. I’d lie there and take it and probably agree with you. I am not a serious critic.

But hey. I love records. That’s the point. I’m not “right,” here. I’m not correct. These records aren’t the only records ever or the only ones I enjoy or the most essential blah blah blah of blah blah blah that you should blah blah. These are not "look at me and my records I have, consumerist brag, aren't I so great"? These are just records I love that make me glad there’s such a thing as any record, and glad there’s such a thing as these specific records, and glad I can have them and be with them and listen to them and know them while I’m here being alive. I love these records. I love them so much I put them all out on my kitchen floor and took a picture of them for you. For our purposes, my kitchen floor is a kickass laser field. I'm happy to show you my Kitchen’s Floor, but I draw the line at allowing you to see my kitchen’s floor.

If there’s a great record not on this list, I either don’t own it or I’m not as into it right now as the records on this list, for whatever reason. My method for compiling this was scientifically derived by looking at my records and thinking about them for the bare minimum amount of time and then writing down my thoughts.

If I had to guess, I’d say this has a 90% chance of boring the living breath out of you. Enjoy.

33.333333: Thee Hydrogen Terrors – Terror, Diplomacy, and Public Relations
I love a third of this album more than I’ve ever loved any third of any album ever. Another third of it is pretty damn good, and the last third is a complete fucking mess. Over three minutes of audio thank you’s? PRESSED ON VINYL? As much as I love the complete horribleness of that idea, this assures I will never play side two of this in my house ever ever EVER, even though “Plate In My Head” is in contention for my favorite song of all time.

33: A Tribe Called Quest – The Low End Theory
I was watching the Tribe Called Quest documentary, and when they got to the part where they went into the studio to make Low End Theory and they play Phife’s verse on “Buggin’ Out”, I cried. So yeah, it’s on the list. It’s a rule I have. Any album whose mere existence has made me cry tears of joy makes it on the list. Even if 2XLPs are a pain to listen to and I don’t even have to play it because I have every single moment memorized.

32. Lightning Bolt – Ride The Skies
I’m just glad I have this to work out to twice a winter. Also, if I was a major league baseball player, “13 Monsters” would be my at-bat music. I love having a stock answer to a question like that, something nobody will ever ask me unless they’re just waiting to tell me their answer. I think about this pretty much every single time I watch a baseball game, which is often.

31. Television – Marquee Moon
The first time you start listening to this it’s overdone and pretentious. The second time, when you already know every note and you’re not all hung up on figuring out what you think of it, it makes you slowly shake your head side to side with your eyes closed like you’re on a porch swing in a Bonnie Raitt video.

30. Heavy Times – Dead
This is my favorite album by a Chicago band since I moved here in 2001. Yes, including fucking Wilco fucking Yankee Hotel fucking Foxtrot.

29. Comets on Fire – Comets on Fire
Collector info bonus: the metallic flakes from the gold spray paint get in the record’s grooves like guaranteed dust, just FYI, so don’t pay any more than $50 for it.

28. Sam Prekop – Sam Prekop
Okay, so you caught me. I have a favorite sex record.

27. Les Rallizes Denudes – Heavier Than A Death In The Family
Do I really listen to this all the time? No, but when I do, I need to. I have a lot of records in the category of autodestruct soundwall masochism rock, but this is the best one, probably in existence.

26. The Monks – Black Monk Time
More than any other album on this list, nothing like this would have ever been made if it weren’t for the fact that these particular guys made this particular thing.

25. Thin Lizzy – Jailbreak
If you’re not at least mildly happy when somebody puts “The Boys Are Back In Town” on a jukebox, you’re a communist.

24. Personal and the Pizzas – Raw Pie
Stealing every riff and melody the Stooges and Ramones ever came up with and making them all into songs about pizza is an idea whose time has never not come. If you don’t “get” the “joke”, I feel sorry for you (the joke is there is no joke and there’s nothing to get and “the craft of songwriting” is at its best when it’s at its easiest).

23. The Rolling Stones – Flowers
Yes, my favorite Stones album is an outtakes collection. It’s my body and I get to decide.

22. Alexander “Skip” Spence – Oar
We all need a boo hoo hoo album, and this is my boo hoo hoo oh wait what am I saying at least I’m not going insane, I’m fine, I’m fine album.

21. Can – Delay 1968
Malcolm Mooney is the Nikola Tesla of frontmanning.

20. Brian Eno – Here Come The Warm Jets
So I wear lipstick and women’s underwear when nobody’s looking, so what? I love this album because you have no way of knowing if I’m kidding right now.

19. J.J. Cale – Naturally
If I put this on at a barbecue and somebody was like “this is bumming me out,” I’d call the guys from X-Files.

18. Richard Hell and the Voidoids – Blank Generation
The marriage of poetry and rock n’ roll has always been a rocky one, and it turns out the best marriage counselor is Robert Quine.

16. Shoes – Black Vinyl Shoes
What’s great about this album is every single time you listen to it, you rediscover every single song and go, “Oh yeah! This one! I love this one!”

15. Magic Sam Blues Band – West Side Soul
Sometimes I like to crank this on the weekend while I dump with the door open because it’s morning time and I’m a grown man.

14. The Stooges – The Stooges
If I had to choose a favorite Stooges album, it’s this, but really Funhouse and Raw Power are tied and I just put The Stooges The Stooges here because cut and paste.

13. Young Marble Giants – Colossal Youth
Once you tell yourself the bass is not actually trying to be funky but instead is presenting moments of bass funkiness as a kind of funky bass found sound, this is a perfect album.

12. T. Rex – Electric Warrior
I hope nobody’s reading this hoping to be surprised by anything. Yes, I too do the shoulderhunchy coketeeth dance to “Mambo Sun.” I will do it alone, in a crowd, wherever.

11. Thee Oh Sees – Help
Those eight notes that open up “Enemy Destruct” are the very fuckest of yesses.

10. Love – Forever Changes
You guys heard of this one?

9. 13th Floor Elevators – Easter Everywhere
This is just now emerging as a go-to for me, and man oh man was it worth the wait.

8. The Congos – Heart of the Congos
Little known secret: the grooves on this are so deep that if you put this on while you’re doing dishes, they’ll come alive and do themselves like in Fantasia.

7. Suicide – Second Album
I like it more than the classic first album because Frankie Teardrop is too much.

6. Guided By Voices – Alien Lanes
Would it kill these guys to put out some more reissues? How much longer must we all pay the price for not being one of the five people that got Bee Thousand on vinyl?

5. The Kinks – The Kinks Are The Village Green Preservation Society
I love it when an album bites all the way into the runout grooves and you can put it on and get something accomplished before flipping it over and also that whole time it’s this.

3. The Troggs – Wild Thing
Wading through the two-song differences between US versus UK versions of LP’s in the 60’s is such an exhausting waste of time they actually make me thankful for the invention of the MP3. Mono vs. Stereo pressings I understand, because once stereo showed up people were like “oh cool, we can finally put the drums on the side of Ben’s car that’s shorted out,” so of course Mono is better (unless the Stereo pressing is the rarer one), but debating UK versus US versions is a pain in the ass. Still: I choose the US version of From Nowhere because “With A Girl Like You” is the best song on the album, and maybe all time, so US version gets the nod even if “The Jaguar and the Thunderbird” on the UK version is great and underrated. Another bonus: I have the US version and not the UK version.

2. Television Personalities – …And Don’t The Kids Just Love It
This is the perfect album that is most perfect for me right now. It hits me right in the middle of my right nowsies.

1. The Velvet Underground – The Velvet Underground
I’m a third album guy. Sometimes you walk over and take the needle off during “Murder Mystery” and then stand there with the platter in your hand and stare out the window for 15 solid minutes, and sometimes you let it go all the way through “After Hours” and then flip it over again before standing there and staring out the window for 15 solid minutes. Really the best VU album is if you took this one and replaced those last two tracks with “Oh Gin”, “Inside Your Heart”, and “Sweet Jane”, but then the Velvets wouldn’t be the Velvets, and if there’s anything I know in this world it’s that the Velvets MUST be the Velvets or else all hell will break loose.

@itisbenjo
Posted by Ben Johnson at 11:14 AM