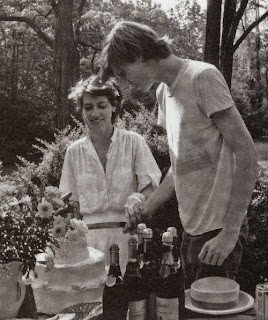 I’m sure you’ve heard by now about the Elle interview with Kim Gordon in which she explains her recent divorce as being the result of Thurston Moore’s infidelity. There might have been people in your Facebook feed who made frowny faces and grandstanding declarations about it. That’s how I found out about this total non-thing of a thing that doesn’t involve me. But you might not have had that experience. I’m a 33 year old liberal college-educated Caucasian who likes rock music. My peer group is all over this shit like white on noise.

If you didn’t spend a portion of the early 90’s being a teenager with an unnatural hair color, you probably don’t understand what all the fuss is about as far as Sonic Youth is concerned.

In the 90’s, Sonic Youth became, or allowed itself to become, an institution. Institutions are different than mere bands. Institutions are living emblems of ideals, and whatever they do doesn’t matter as much as the ideals they seem to espouse. In Sonic Youth’s case those ideals were experimentalism, some vague but brash-seeming blending of political dissent with sonic dissonance, building and fostering sustainable alternative (yes, that word, “alternative”) lifestyle infrastructures, and feminism, and gender equity, and masculinity without misogyny, and, you know, like, those dumb knit hats with the ear flaps. Aside from the hats, Sonic Youth stood for a bunch of good ideas. They weren’t just a band. They were the good guys. They were doing it right. Kurt Cobain admired THEM, for Chrissakes.

And: they were also a band that for all their faults was at least way WAY better than “Get A Grip” era Aerosmith and whatever else Mtv was ramming down our gullets at the time. So they had our attention.

The problem with standing for a bunch of ideas is you become, to anybody interested in those ideas, something other than a human being in the real world. That’s what fame is. You don’t like it, don’t be famous. Fame is extremely easy to avoid.

Fair or unfair, when you are a thing and not a person, you take on the onus of being different than what you actually are because of some perceived benefit. Maybe that benefit is just “I’m a member of the Rolling Stones and I wish to fart out money and fly around the world on jets.” It amounts to hokum, even in the case of Sonic Youth and all their good ideas of showing kids that they didn’t have to tune their guitars the “correct” way, and showing girls they could rock out, and boys that they could rock out without being assholes, and everybody that they could support each other and rock out and not like George Bush very much, and as long as we do things right and are nice to each other, we probably won’t all die of AIDS.

It may have been a little overladen, but that was their message. Unfortunately that message has to function in a world made of people, and people have penises and vaginas and feelings. None of us is good and none of us is bad, at least not all the way, and none of us has control of anything, and we’re all just wandering around like stupid lost idiots full of ape DNA. Teenagers are incapable of knowing this because they are the most good and bad and out of control and stupid and lost and idiotic and apelike people of all, and they have to believe things will get better for them or else they’re going to TOTALLY lose it. So: teenagers get excited about Sonic Youth. Or at least they used to, back when.

I was one of them. To a point. And then I heard “Panty Lies” and decided that, wait, maybe this is not actually that great of a band, and certainly not that fun of a band, and maybe even though I like what she represents I think Kim Gordon is my least favorite part of this not actually that great of a band, and maybe it doesn’t matter what I think about this band because I can have all of those things that are good without having to also listen to and like everything this band does, and that’s an okay thing that will not bother anybody as long as I’m not too snotty about it. Maybe the final stage of naïve teenaged Sonic Youth fandom is independent thought. If so, they really are a remarkable band. Just, you know, maybe not the best band band band. You’ve got to feel bad for Lee Ranaldo. He gave it all he had.

Anyhow, residual teenage worlds come crashing down, it turns out that Thurston Moore is a human being. A man, even, capable of hurting multiple other human beings by doing what his penis, if not his penis AND his heart, tells him to do. I wouldn’t judge him too harshly if you can help it, except if you want to say that his new band is exactly just Thurston Moore still with no surprises. It rocks hard enough to get him laid if that’s what he wants. Maybe it is.