Read a Book, Listen to a Record, Watch a Game 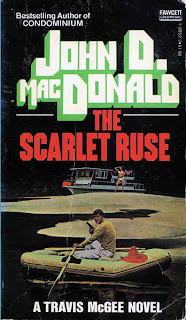 This one is about a stamp collector who gets entangled with the mob. I am in the middle of the information-gathering phase where Travis McGee stumbles around like an idiot, bothering people who no sane man would bother and pontificating about society’s downfall while being distracted by a woman with some kind of complicated hang-up designed to make bedding her seem more impressive to the reader.

The details of these things are never as important as the tone, and this one so far is fairly bright, although one person has already died and everybody who’s likely involved on the business end of the actual thing McGee should be focusing his attention on is the worst kind of human. This is how these books usually work. It’s fun and games through the exposition and then something bad happens and it’s a lightning quick run to the end. These books are mindless and fun. They make me think nothing more substantial than a sex idea or two.

I’m enjoying all the stuff about the stamps. It’s making me feel better about my record collection, which is swollen and useless, but according to McGee’s economist friend Meyer, probably a sound investment. 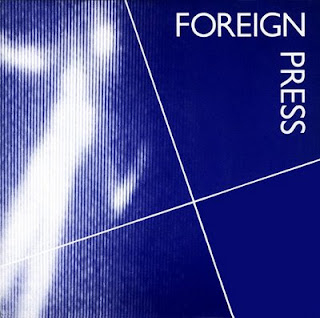 This is why I need a little encouragement about my record collection. Because I buy things like this. This record sucks. It sucks in that way that only something with non-suck potential that doesn't quite all the way suck can suck. It's a disappointment suck. I bought it because it’s rare and because a while ago I decided that one of my little areas of expertise and interest would be all things from 1979.

I was born that year. I think the initial idea was I’d play all of my 1979 records on my birthday and everybody would think I was so cool. I’ve only actually done this once, and it was whatever a disaster is except when it’s boring instead of a disaster. Now I’ve come too far not to keep going. So when this dumb fucker hit a favorable price point, I pulled the trigger. The transaction was as mechanical as that.

Buying a bunch of records from 1979 just because that’s when they’re from illustrates several problems with the “good/bad year for music” myth. Quality-wise, every year is about the same. All years have some classics, some overrated luck-out hits which were a big deal at the time but which age as well as Subway bread, some absolute garbage, some very well-hidden gems, and a groundswell of mediocre bands all imitating each other.

In some years the groundswell of mediocrity sounds better than in other years, and therefore offers more fodder for potential very well-hidden gems, and I guess that’s what people mean about when they say something is a good year for music. They just mean that a shitty band in 1966 had a better chance of accidentally doing something good than a shitty band in 1984.

1979 is a “good year for music,” but not really. Really it was the year when all of the mediocre bands morphed irretrievably from mediocre punk bands into mediocre new wave bands under the banner of “trying new things.” So you get a lot of stuff where a weird funny synth sound comes in from nowhere, and a lot of stuff that doesn’t have the balls to rock and the rhythm section doesn’t have the chops to bring a groove to life and the lyrics are overtly political and hyper-serious in a way that screams “tiresome overtry.” You get a lot of sodden stuff like this Foreign Press 7”, which accomplishes nothing more effectively than clearing a dance floor and making a night of all 1979 records seem exactly as boring and pointless as it is.

But hey, if Meyer is right, it’ll be a good investment. Nobody’s ever going to repress it, and people seem to be willing to pay more than I did for it. But as far as a night at home goes, I’m going to play this once and then put it the “F”s and then sit and think instead of listening to more music. This is the best case scenario for something I don’t actually like, though. Maybe I’d prefer a record that sucks and makes me think to a record that merely doesn’t suck and doesn’t make me think anything at all. If so, that’s an odd bias, and probably means I need to get out more and get laid and live life and all of that. 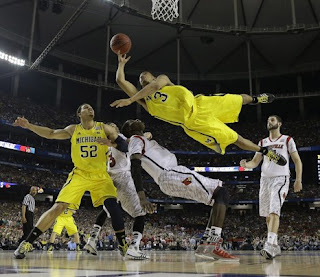 I wasn’t expecting much here because it’s been a damn long while since one of these college basketball championship games was even mildly watchable. But these are two teams talented enough to play real life beautiful basketball without a superfluity of irritating gimmicks designed to slow the game down and level off an athletic disadvantage. I like upsets as much as the next guy, but they often come as a result of horrifying unwatchable meatgrinder basketball games, and I’d rather watch some Division I quality fleet gentlemen run and soar and be visibly exceptional.

This game was entertaining enough for me to put the book all the way down by halftime and not feel any strange absentee parent object personification guilt about not wanting to listen to anything after Foreign (de)Press. Michigan advanced slowly and lugubriously through Louisville’s press, then either drove to the rim or jacked a long three that improbably went in more often than not. Louisville would initiate some cute half court set off a high screen designed to get a ball handler some space to drive, dish, or shoot, and if drive or dish they’d rely on their more athletic big men to clear the lane and/or clear up the slop on the offensive glass, and if shoot they’d have better spacing for the long rebound if they missed, which they didn’t too often.

Both teams would break, gazelle-like, in a heartbeat if presented with the ball and any semblance of numbers. The Louisville plan was more sound, the Michigan execution more ferocious, and the resulting game was 80% of an old time contest of street ball one-upsmanship between evenly matched teams until the minutes waned, the game plans tightened, and the refs stepped in and ruined everything.

Much will be made of the refereeing in this game, but once you assume that all basketball referees are going to be awful, these refs in this game were at least not the deciding factor. Bad calls tended to come with a matching bad makeup call, and nobody fouled out, which was absolutely the strategy for Michigan late in the game. They sent their college Player of the Year, the relatively diminutive Trey Burke, to the rim to be hacked to pieces time and time again, but Louisville rotated fouls well enough with help from the refs for nobody important to ride pine down the stretch. What I saw happening was Louisville operating as a team and Michigan as an alternating series of gallant individuals.

This is not an indictment of anything Michigan did wrong, per se. It was out of necessity and based on personnel. Nobody on that team has the passing instinct. They want to put the ball on the floor and either blow by you or cross over, pull up, and put one right in your mouth. But coach Rick Pitino and the Louisville squad played dummy beautifully, allowing Michigan to think they had a chance in a wide open track meet before clamping down in the final minutes. That’s the thing about beautiful, wild, open-range free flowing basketball: both teams have to agree on it, and they rarely do because it’s very rarely the best way for BOTH teams to win.

This game had me wishing, as I usually do when I think about how anything should be, that people could drop the primacy winning in favor of either winning or losing so artfully that the greatness of the pursuit resounds through the ages. In the last seconds I was yelling "come on" at my television, not out of any rooting interest other than my own greed for witnessing one of the greatest things I've ever seen. Pitino wasn't having it. The refs weren't having it. Winning and losing is the point of the whole thing, not the artfulness, because we live in a world made of too many people and not enough things, and winning and losing is how grown-ups inhabit it. Sadly.

The good news is that even losers can make for a decent story, so that's your consolation if you're a Foreign Press or a Michigan or a John D. MacDonald. Which you probably are, along with all the rest of us thingless people. And as another bonus, sometimes we all get to watch a big game in a Georgia Dome atmosphere that is as surreally gigantic and preternaturally intense as any of the better Oliver Stone movies, and be at least invigorated to see two teams not be so swallowed by the immensity of the moment that all they could do was brick their shots and cry into their towels about unfair foul trouble.