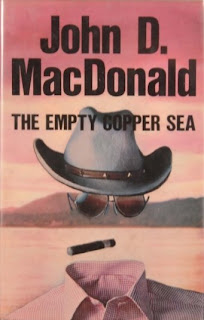 I’m getting pretty good at diagnosing how good one of these will be within the first 30 pages or so. This one will be average. My favorites tend to be in the “this time it’s personal” mold. This time it’s not personal yet. This time it’s about Florida in the late 70’s and how its local power structures benefit from fucking everything up. One of those. This one and then four more and then I’m done with McGee and I’ll have to figure something else out. I might need a namby pamby travel writer to gasp at the wonders of the world and take the stink off. MacDonald is getting grim. 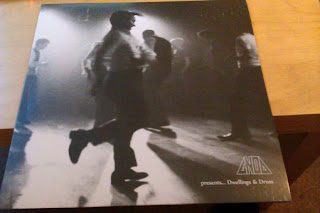 It’s been raining almost nonstop in Chicago for over a week. There’s been flooding and everything. Yesterday was another one. Sometimes I want to fight the blahs with something bright and nice and escapist, and sometimes I want to barrel into it with something dark and dense and repetitive. Manchester noise collective Gnod are obligingly dark and dense and repetitive, and this is a particularly electronic and cold and distant offering by them.

I don’t know why I picked this one up. Mostly because it was raining and I decided to go slightly out of my way and take shelter in a record store until the rain let up. Only it didn’t, so I was forced to either walk the longer way home in a cold rain, empty-handed, with less of the evening ahead of me, or pick some likely beast out of the bins that would fit my mood at the time and give me something better to look forward to than no longer walking in the rain. This was my choice of carrot and stick. Might as well buy a record if you ever find yourself acting out a Camus novel.

I have more than my share of things like this already, and I only ever listen to them when I’m in a desperately bleak and vulnerable mood. They remove me from my body and harden my skin while I’m gone so I can come back later and maybe do the fucking dishes like an adult is supposed to.

I’m in the midst of a living situation limbo wherein my nice, sweet, elderly landlady has died and thus vacated her half of the two-unit building. I think my legal status is technically down to common law this and squatter’s rights that, which makes me uneasy, but at least I can crank the music. I tend to still be as polite as possible about it because I once lived next door to some rave DJs and it scarred me for life, but this one leapt out of my speakers in a bass-heavy bowel-shaking pulsation that judging from the amount I enjoyed it, I must have needed. I also think it helped my building’s forlorn energy to shake a little dust out of the foundational walls. I try to keep it down past eleven pm. It’s neighborly. 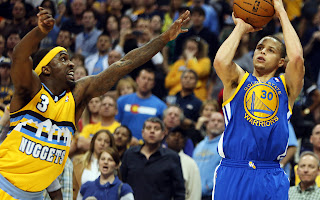 I love everything about this playoff series. These are two teams who want to run their opponents off the court. Both are without one of their top two best players, screwing up rotations and creating odd playing-time decisions. Both teams will play ultra small and fast lineups designed to waterbug around the court and score in wild flourishes. The uniforms of the two teams even match.

This game featured nobody playing defense except for gambling on steals, and the Warriors took more efficient advantage. It is not often an opposing team will come into the Denver altitude and run the deep-benched Nuggets out of the gym, but the number and duration of TV timeouts in a playoff game negate that advantage, and the Warriors are a young, athletic team of runners and gunners.

Golden State guard Steph Curry’s jumpshot, when it’s falling like it was this time, is a thing of beauty. He flicks the ball effortlessly out of his hand and keeps it on a thin, invisible leash, pulling it through the other side of the basket on his quick-wristed follow-through like the old magic shop dollar-snatching gag. The ball seems to shrink in size and pick up speed as it leaves him.

The biggest knock on Curry as a player, other than defense, is his inability to keep his ankles from spraining, and at one point he rolled his ankle badly but then walked it off. This is what it’s like to roll your ankles once you’ve already rolled them plenty: there’s nothing in there left to go wrong, and you just continue on hurting slightly more than the regular amount. I’m glad he was able to stay in the game, even though Curry’s shot is so smooth he could probably lead an average-quality varsity high school team in scoring from the confines of a wheel chair.