Pass the Record on the Left Hand Side 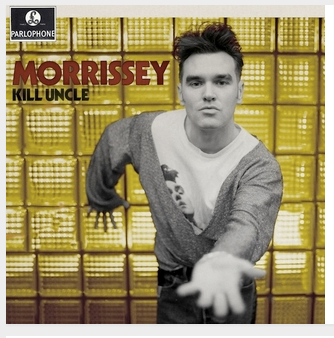 I knew I wanted to title this post with some sort of play on the lyrics to "Pass the Dutchie," but I did not know what the lyrics were in actual reality. All this while, for as long as this song has occupied a very small flap in my brain, I have just mumbled something along the lines of "pass the dutchie on the left one time," whenever I wanted to sing the song. I don't know why I'd be singing this song, but it's happened. I just Googled the lyrics and I wasn't that far off. I'm already thinking about other things ...

This year Record Store Day falls on April 20th, which is 4/20. Immediately after typing "this year," I thought "maybe it's not just this year, maybe it's every year," and I don't know the answer to that. Let's just focus on the present. I have never properly gone to, navigated, participated in, or otherwise given much thought to Record Store Day, but this year I'm going to because 1) I work from home and can do whatever I want now. 2) My girlfriend is going to be making pot brownies, which will make it MUCH easier for me to leave the house. A few years ago I found myself in a record store in Portland with Calvin Johnson on what happened to be Record Store Day and I was very casually trying to find this Wild Flag 7-inch. I asked the bearded man behind the desk "hey, do you have the Wild Flag 7-inch?" And he was like "what?" And I made a face and walked away. (Do you like how I also very casually just mentioned that I was hanging out with Calvin Johnson in a record store, giving no back story, like it's truly NBD? That's a thing people do on blogs, right? Did I just do a thing?)

In my planner for 4/20 it says:
Austra thing and Kill Uncle Re-issue.

Only half of that very short list has anything to do with Record Store Day. I saw on some blog that Austra is releasing a special thing for that day, but I probably won't be able to find it, and I just heard this morning that Morrissey re-issued Kill Uncle on vinyl and I'd like to own it. I looked it up on Amazon and it's listed at $42, because it's new. I added it to my wishlist, and then thought about how I'll see if I can buy it when I'm going around to different stores on Record Store Day. I only really plan to go to like three stores because we'll be high on pot brownies, and I also think we're gonna try to go to brunch that day.

I guess I just wanted to check in and say hi? Wait, no. This was my official Record Store Day post. It goes something like this: buy a record if you want to buy a record, or don't. You can probably find it on the internet later. Or maybe you won't. There's always brunch and pot brownies, which you can just have every day. You can buy records every day too. You know that, right?