Are These Things Even Still Things Report: Phoenix on SNL 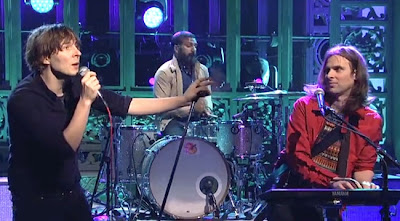 Do thirteen and fourteen year old children still watch Saturday Night Live, lonely, in the dark, high to the gills on Easter jellybeans? Do they see the promos during the week and get excited or disappointed about the host and musical guest? Is that a thing still? Is that even still a thing?

I’d plow ahead and talk about Phoenix on SNL this weekend as if it were really a thing that happened, but I’m not sure it was. I just recently achieved DVR power and it’s making things like Phoenix on SNL seem like the naked cash grabs they might be. The musical guest on SNL is in the category of Automatic Zoompast. I had to beg my girlfriend to go back just to see who we’d be fast forwarding this week.

This is what the DVR and the internet are doing to pop culture. Purchasing power has been removed from the hands of the masses. There aren’t enough people left who actually buy music. There are a lot, yes, but not as many as there used to be, and that’s the opposite of growth, and growth (or at least perceived growth) is money. The masses aren’t paying for content anymore, so make the content fit whoever is paying. Advertisers. Make the content into an advertisement for other things the masses can pay for.

This is a game as old as media, but it’s reaching a fever pitch recently given how rapidly direct-from-content revenue has evaporated. The audience isn’t the audience anymore. The audience is the guy backstage who is watching to see how well you connect with the audience. The audience is the money in that man’s boss’s back pocket. And that audience demands Phoenix. It pushes Phoenix out front and center to see if they still have whatever “it” factor of being fashionable and attractive and French and playing synthesizers and sounding vaguely and unintimidatingly totemic of youth in a way that might motivate enough people to buy enough $329 iPad Minis to get APPL back above $500 a share.

There are more than a few people who get suckered along the way into thinking that Phoenix are an actual band playing actual music for actual people, and if you drop all the paranoid money counting, sure, that's what they are. They are an actually fashionable and attractive and French band, actually playing synthesizers and sounding vaguely and unintimidatingly totemic of youth. Listening to such a thing can be a pleasant and rewarding experience, APPL stockholder C-suite flopsweat notwithstanding. But it can also be a thing you zoom past without a second thought, as can anything ever from now on.

Soon there will be such a thing as a personalized commercial that reaches into your Google or Facebook search and browse history, throws your preferences through a rigorous series of algorithms and then attempts to sell you a Capital One card by playing Boris instead of Skrillex if you are, for example, me. This is absolutely going to happen someday soon. The days of somebody other than you deciding what you might like are numbered. There will be a refinement period that will last as long as a few flops of Moore’s Law, and that will be it. You’ll be yourself only, unique and wonderful you, and no matter who you are or where you’re hiding, they will find you, and they will plug you in to the galactic moneyflow machine to be productively milked over the course of a lifetime, and they will tell you all the while how little like everybody else you are.

These are the directions my brain wanders as I zoom past Phoenix on SNL playing “Entertainment” in promotion of their tellingly titled new album Bankrupt!, pausing only to see if keyboardist/bassist Deck d’Arcy is ever going to take that bass off his back and play it. He is not. He is not going to do that. He is going to be a longhaired French guy playing a synthesizer with a bass on his back for purely theatrical reasons. I can almost understand it. The bass on the back says “we are a band, you are watching a band” in a way that a Korg Mini can never communicate. The idea of bands is going through retro uptick right now among valuable demographics.

Of course that’s the cynical view. The reality is probably more like, “There wasn’t any bass on that song, but I play bass on the next song we played for the studio audience through the commercial break, which we didn’t have to do but we did because we are cool, and we don’t actually give a shit about this American television appearance except insofar as it allows us a chance to hang out in New York with the dwarf from ‘Game of Thrones.’”

Then a guy like me pipes up on the internet about doom and ruin, and it’s “well, fuck, why shouldn’t we drop all pretense and run go get the money if all our considerable efforts to write and hone honest pop songs are just going to lead armchair critics to pronunciations of the apocalypse?” Why indeed. I don’t blame these guys one little bit. They’re probably great guys. I’m not too into their music, but that’s forgivable. They’re a new wave singles band. They’ve made a real good single or two along with some decently hooky album cuts, and they probably will again if they can pull their heads out of the muck of outside interests and effectively be who they are. They're basically Orchestral Maneuvers in the Dark 2010's version. No shame in that game. I’m glad there are new wave bands out there trying to contribute new entries to the catalog of Friday night jukebox perfection. That’s a perfectly acceptable category of thing. It doesn’t rank too high for me, but that’s no crime. It doesn’t bother me that I’m not their audience.

What bothers me about Phoenix is that by not being their audience, I am reminded once again, as if I needed it, that I’m not the money; that I have no power; that I don’t measure up and probably never will. And that is why I zoom past, looking only for an opportunity for cheap derision and settling on a musician wearing a giant Fender necklace as a fashion accessory. Making fun of a bass player for looking like a goon? Please. I should be above that. We all should. And we all might be, for all I know. All of this might not even be a thing. This might be a non-thing.