Flying first class makes you different than other people. That's the whole thing of it. "Different People, Better People, People Who Spent $90 On An Upgrade At Check-In On The Off Chance American Would Allow First Class Passengers To Transfer To An Earlier Flight For Free Rather Than Pay The Ridiculous $75 Transfer Fee, Which Thanks To Delays To Other Flights Ended Up Not Mattering."

It actually takes a good deal of the shine off it to have now flown first class. Before this experience, I used to walk past the first class people on the way to my regular class seat and if any of them looked kind of cool I'd think they're famous people I'm not hip enough to recognize. "Oh, that guy must be Arizona Cardinals wide receiver Steve Breaston, only I don't know what Steve Breaston looks like," I'd assume, somewhat racistly, "He's flying in first class. And that other guy with the goatee must be Pulitzer Prize winning novelist Jeffrey Eugenides, whose face I can not remember ever having seen in any capacity, but surely these people are up here for a reason, so that goatee guy on my routine flight from Washington to Chicago probably wrote 'Middlesex.'"

I thought first class actually qualified you for some degree of mythologizing. That is the narrative of first class. "These are the special people, they have earned this and they deserve to be here." It is not "look at these idiots who paid $90 extra dollars to be slightly more comfortable for 2 hours." That's how I felt in first class. I felt like an idiot. But: a special one. A very special idiot indeed.

Here's how it went down. 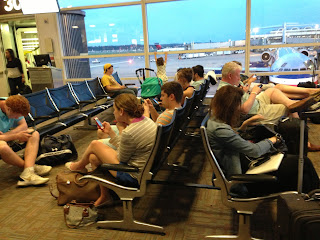 Here are some of the sad unwashed masses who had to sit around and wait for the flight but who would not be flying first class like me once the flight boarded. Look at them. Pity them. For they are the great unknowing, the blundering rockeaters, the hapless conduits of our success and power. Us who fly first class. First class us.

Actually some of the people in this picture turned out to also be flying first class. But: look at them. Sitting down. With their portable electronic devices. 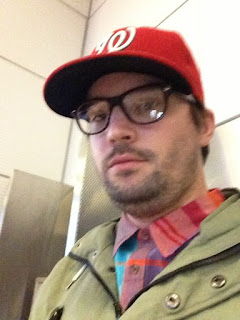 Who's that? Just some fucking idiot standing up over there by the pay phones. What's that smirk on his face? I'd like to slap it off of him. Airports are not the place for smirking. Airports are a place for seamless unison with the balletic choreography of total bureaucracy and the silent acceptance of tension. This guy seems like he's enjoying some secret knowledge. Who does he think he is? 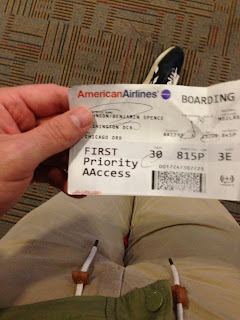 He's a first class passenger. That's who he thinks he is. It says it right there on his ticket. He's looking at it to see which order he'll be able to go and start sitting on the airplane once it starts boarding. He will be first. That's what the ticket says. "FIRST." 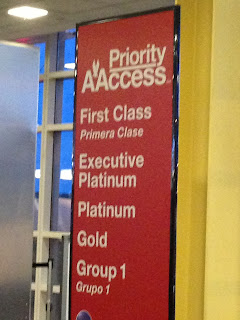 That's probably why he's standing over near the Primera Clase line. He must be numero uno. First Class even gets top billing over Executive Platinum, Regular Shitty Platinum, Gold (Not Even A Little Bit Platinum, Kind Of Pathetic At This Point Really), and Group 1 (Grupo 1), which, if you're just Group 1, I'm sorry, but you're going to have a long look at your life and see what you can do to improve your circumstances. 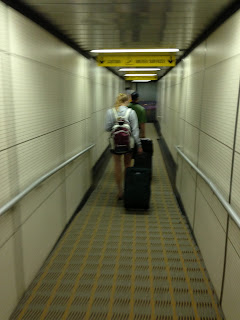 These two arrogant pricks had the nerve to board the plane before I did. This was a subtle reminder that there's classes even within First Class. Heck, the REAL Richie Riches were nowhere to be found. They were flying from DCA to OHA on private jets and paid a premium to not have to wait or even ever be seen by anybody as pedestrian as a first class commercial jet passenger. Could you imagine if any of us had actually SEEN the private jet people? Our retinas would probably explode. Yep, I've still got a long way to go from "guy who sometimes wastes $90" to "guy for whom $90 is barely worth picking up off the ground." BUT I AM GOING TO MAKE IT, and I don't care who I have to hurt. That's what I learned from these guys. They have the right idea. 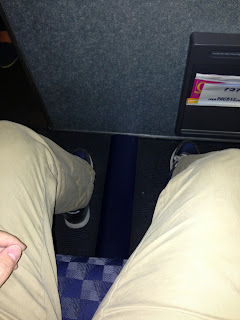 This is a picture of all the room my legs had to be in. As I took this picture, the flash went off, exposing me as a tourist in First Class. Nobody else in First Class seemed the slightest bit impressed with themselves. They just sat there being boring, playing Fruit Ninja on an iPad. I decided to maybe stop taking pictures of everything like some kind of a blogger, but generally otherwise ignored my fellow First Class passengers. In First Class, you can ignore people. They are not sitting in your lap. They are not farting in your face. This picture, incidentally, shows about the area where some of my own farts went down. You can fart in First Class. I did some excellent First Class farting.

Around this point the Regular Class people started boarding, and they streamed past me in their printed t-shirts and their factory worn jeans. They looked exactly like a version of me who would patiently wait for a seat while not having spent $90. They looked like suckers. I felt bad for them. I read my book.

Then I heard my name. Daniel Strauss said my name. He's a guy I know who does comedy with The Second City. He said my name and then we awkwardly said hi to each other and then he went back to the part of the plane that I didn't care to know anything about this time. 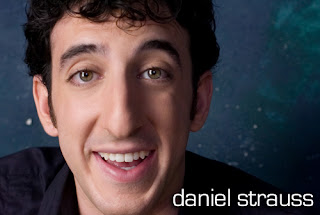 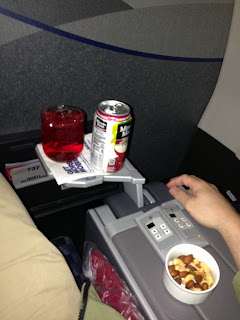 Then when the plane took off they gave me juice and nuts. "Big deal," you might be saying, "they give us juice and nuts back in Regular Class too." But these nuts were WARM, and they came in a little bowl, and the juice was in a glass. Like a real glass made of glass because in First Class they treat you like an adult who can physically hold juice without some kind of a catastrophe happening. And look at that small tray and how little it is intruding on my whole knee area.

Later I was brought a warm cookie. I didn't take a picture of it. It was a cookie. You know the drill, right guys? Or do they not let you regular shitty people eat cookies back in whatever dilapidated shantytown you call home? 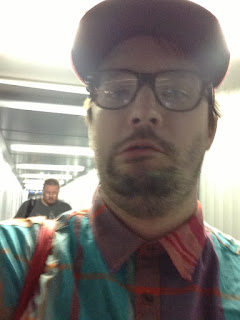 Here's me making a hasty exit. First guy off the plane. That guy behind me? Eat my dust, buddy. I'm outta here. First Class.

So: was it worth it? The ninety extra dollars I spent to fly first class?

What First Class does is it takes the actually being on the airplane part of traveling and makes it less like being on an airplane and more like hanging around in a cousin's living room while they work from home. It's still uncomfortable, but they're nice to you and you can just kind of zone out for a while. So it's like the airplane part of traveling is erased, and you're just kind of hanging out in two different airports between leaving and arriving. I don't know that it's worth ninety dollars.