Video Games Are Like Homework You Can’t Stop Doing 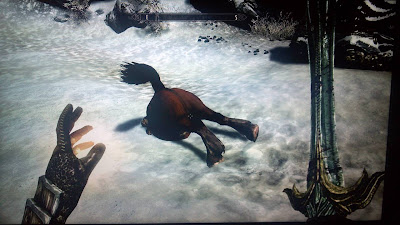 I’m having a hard time functioning today because I spent the last two nights playing Skyrim until 3 in the morning because I am an idiot. I recently bought a copy of this fucking nightmare time destroyer for $5 at a garage sale because some 12 year old kid was in the bathroom at the time and his drunk dad didn’t give a shit. “He bought the damn thing with my money anyway,” said the drunk dad. Good point, drunk dad.

Not a rhetorical question. I am asking you to tell me why I am doing this.

Skyrim is often more like a medieval -themed stress dream than a fun thing to do.

Here’s what happened to me last night: I had to climb up a mountain to go up to see the elders, but I died a few times because there’s a frost troll up there, so I had to learn how to sneak around the frost troll. Then I saw the elders, who taught me how to dragon shout, but then they wanted me to go get this thing for them from a cave that’s far away and full of zombies. So I walked all the way there to the cave, and when I finally got through the zombies, somebody took the thing I wanted. Then I had to go all the way back where I came from, but then there was some weird glitch where the walls were glowing green and everybody wanted to kill me. So I looked up on the internet what to do and some nerds on a message board told me to find a quiet little village to get arrested in so I could pay off a bounty, and also the internet nerds said that maybe I might be a vampire which is a serious disease. I started to get all upset like oh no I’m a vampire now, oh no this is bad, but it turns out no, I just had to pay this guy 5 dollars because I was breaking into somebody’s house and I was so happy to see him because he didn’t want to kill me. Then I got the thing and went back up the mountain to give it to the elders so they could teach me more dragon shouts. The end.

That’s was really what happened in the game, a thing I chose to do with my time. If that was a day of your real life, it would be one of those days when you’re stuck in line at 7-Eleven and you want to stab a guy to death in his gross hairy neck because he’s buying a lottery ticket. But in the video game, hey, it’s fun; it’s voluntary and fun. I was wearing armor. I was shooting a bow and arrow. Fun.

Here are some of the boring, mundane things you can do in this video game: catch butterflies, pick flowers, cook soup, tan a deer pelt, mine iron ore with a pickaxe, chop wood, harvest vegetables, serve jail time, seek treatment for illnesses, take a nap, sit in chairs, eat, drink, do drugs (I defy you to come up with a bigger waste of time than doing video game drugs), get married, read video game books about the video game you are in, buy new clothes, go to college, buy property, pay a guy to give you a carriage ride, use a grindstone to keep your tools sharp, fish, pay a guy to sing you a song, and have boring small talk with everybody everywhere all the time. What’s fun about that?

Oh, sure, you get to fight dragons and kill zombies sometimes, but mostly what happens is the dragons and zombies kill you and you have to go back and start over like the last 20 minutes of your life never happened. Sometimes a fucking saber-tooth tiger jumps out and just rips your guts out, and you’re like “that sucks, now I have to go back and talk to that guy about his son again.”

Right now I’m enrolled in Wizard College. It’s like Harry Potter except all the parts they don’t show you where you’re just a regular person in school and it’s second period at 8:20am and Mr. Grossman is showing you a sin wave and you have a big zit on your head and nobody wants to fuck you.

Why am I doing this?

Seriously. I’m a mess. I look like and feel like shit. The only way for me to stay awake and alert enough to communicate is to drink so much caffeine my head turns into a throb chamber. I’m confused and cranky and I smell bad. And I can’t wait to go back home and play the game some more because the more I play it, the better I will get at some supremely useless skills, which I want because the more uselessly skilled my guys is, the sooner I will be done playing this stupid game. It’s like I’m giving myself calculus homework as a way to kill time until I graduate high school.

You guys ever have dreams where you’re back in high school still? I do every once in a while. Usually in the dream I’m like “this is weird, I don’t have to do this” and I walk away. I wish I did that more often in my life. Or also my fake video game life where I always have to buy a secret key from a guild member so I can file my video game taxes in time for the reaping. Or whatever.