Read a Book, Listen to a Record, Watch the NBA Draft 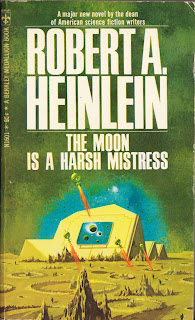 "The Moon Is A Harsh Mistress" by Robert A. Heinlein

Robert Heinlein is weird. All of the old time science fiction guys are weird, but Heinlein might be the weirdest. This is the one where the moon is a penal colony and it rebels against earth because it has a super computer that became conscious, and everybody's polygamous. But it's science fiction, so the plot is just a tentpole for Heinlein's wacky political theory.

Which, okay, he's libertarian and somewhat pro-fascist, whatever, that's weird, and definitely in the spectrum of weird political beliefs that exist only to cause the believer to want to tell everybody about his (always his) political beliefs. "Ask Me About My Wacky Political Beliefs" would be a good t-shirt for Robert Heinlein to wear. But then instead of just spewing political theory, he invented a revolution on the moon as a storytelling device in order to share his thoughts about government. Nobody asked him to do this. He's a weird guy. You'd probably scoot away from him on the bus.

But he's a good writer of fast-paced plot, and he's not afraid of violence. One of the things he does in this book is invent a moon vernacular, an affectation that's mildly infuriating whenever you forget that you don't care. And he at least does you the favor of removing a lot of "the"s, which makes the book go faster. And he calls people "yammerhead." Like some congressman is asking irrelevant questions and demanding irrelevant answers and everybody's like "shut up, YAMMERHEAD."

So yeah, decent chance I start using that one. 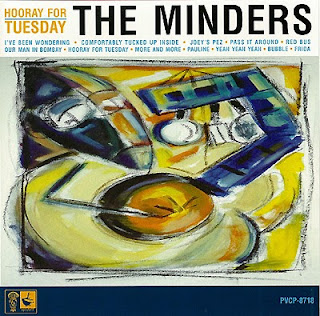 Hooray For Tuesday - The Minders

I'd call The Minders an underrated band, but they're probably fine about where they are, just a nice little pocket of good tunes sitting there waiting for people to kind of like. No biggie. This shouldn't ever be an expensive record to buy on Ebay because "OOP KBD REBECCA COLE FROM WILD FLAG." It should just be "Oh I heard this was pretty good, $15 sounds good, okay, good, I feel good, that was $15 well spent and I'll break it out every once in a while."

I think that whole Elephant Six thing worked against some of the more mid-to-low tier bands attached to the collective. Makes sense. There's only so much of a shit you can give about one thing, and then it's like, "Wait a minute, I have to ALSO like The Ladybug Transistor? Nothing against those guys, but this is turning into kind of a drag. Not everything I like can sound like this. I need room for other things."

I put this on because I got rained on during the commute home and "Comfortably Tucked Up Inside" is the all time glad I'm home and no longer getting rained on I'm changing into sweatpants and drinking tea now song. You need that every once in a while. Your life can't be all Blitzkrieg Bop. 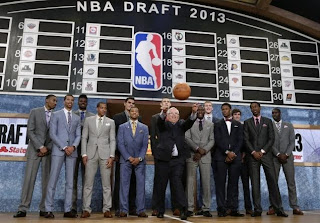 Everybody anywhere who's interested enough in the NBA Draft to actually watch it has more to say on the subject than is necessary. That's its purpose. It's the thing where NBA teams pick which of the 60 best eligible players in the world they want to play for them, and they show up and wear suits and hug their moms, and the teams trade them back and forth, and then network Yammerheads sit around and talk about each guy and each team and each trade, and everybody else who's interested is also watching, so it feels like you're sitting around having a conversation about basketball with the entire rest of the country.

I was interested in a few things (in lunar vernacular to save time):

1. Who were the Wizards (and Bulls) going to draft?

2. Who was going to draft University of Maryland center Alex Len?

Suns of Phoenix. Suns black alternate Len jersey is tempting purchase until see price tag. Never know about future who is good and who is not. Most people say this year draft not good, but one or two of these players will be good. Like Len. Is big, can run, has smartfeet. Soft inside yes, but say same about Pau Gasol and has two rings. Bog look at me make-talk.

3. What kind of trades and idiot things were going to happen?

Celtics don't want to be good anymore, trade best players and coach. Is good move. Were not going to win championship with old guys, can't get better for later as fast unless trade. Gerald Wallace contract so bad worth three first round picks for Nets to get rid of. Almost funny. Trade made yammerhead Bill Simmons upset. He likes Boston sports too much, takes personally when hockey team lose and tight end get arrested for murder and Celtics trade away all best guys all in one week. Said upset man things about "quit on Boston," because could not control self. Coach Doc Rivers call an idiot. "Is idiot, doesn't know facts" say Rivers. Is right. Simmons is idiot, doesn't know facts. Didn't accept, kept being upset. Is yammerhead. Sometimes funny-guy. Asked about Mason Plumlee basketball ability measured in units of Greg Stiemsmas. Was a funny-once. But is idiot yammerhead. Also was last draft of boss David Stern. Always he is getting booed. Is sign of respect on Luna. Last great boo almost sad.

So yeah. That's what happened. There was more, but there's only so much you can give a shit about one thing, and there ain't no such thing as a free lunch.

@itisbenjo
Posted by Ben Johnson at 11:44 AM