When "Let's Get Rocked" emerged as the lead single off of Def Leppard's post-Nevermind 1992 album Adrenalize, and this video flooded Mtv, a twelve year old me thought it was one of the stupidest things I'd ever seen or heard. "Come on! Where's the distortion? I thought we were done listening to things like this forever! These guys are in the 30's and they're complaining about mowing the lawn! That computer stuff isn't even REALLY HOW COMPUTERS ARE," I'd scream internally every time this video came on, which was incessantly during the summer of 1992, "what the fuck is that violin coming from, and that cartoon guy looks so DUMB! I CAN'T BELIEVE ANYBODY LIKES THIS IT'S SO STUPID!!!!"

This is how your thoughts sound when you're twelve. As soon as you notice that something is different (i.e. bad) than it purports to be (i.e. good), you go ahead and blurt it out because you're proud of yourself for noticing something because you've spent the past eleven years of your life not noticing anything anywhere. Context doesn't come into play until later, like way later. Sometimes, and if you've ever been in a business meeting of any kind anywhere and listened to a person chime in with their opinion you can attest to this, it comes not at all.

Looking back at "Let's Get Rocked", twelve year old me was completely right. This is still one of the stupidest things I have ever seen or heard. According to Wikipedia, Adrenalize sold 7 million copies worldwide. That figure seems impossible. Who were those 7 million people? Idiots, right? Come on, you guys, that song is not even good. It's like, for real, you guys, come on. Of course now I know a little more about context. And in light of the context, this song, and the video for it, is fucking GREAT.

First of all, this song is a nothing song. It's about rocking, that ever-elusive activity which parents will not allow and girlfriends the world over would prefer to obliterate with their classical music preferences and their stuck-up denial of intimacy which leads to continual broom-fucking (I think that's what the lyrics imply). Basically "Let's Get Rocked" is just a weird way of saying "let's rock" which emphasizes passive participation in the rocking of others. So the song is a commercial jingle for rocking.

The video functions very much like a commercial, too.

Here's a visual narrative of the video: 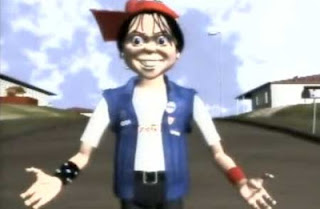 Def Leppard is in a computer program (?), and separately (fade to black and back up) there is one American teenager with an empty brain, who demonstrates the stresses placed on him by anthropomorphizing. Then maybe Def Leppard are a real entity who are merely conveying their message digitally using computer programs, and setting up a big show with digitally-designed lighting grids. Then they play the show in a sort of cyber netherworld while on a British Flag stage to an audience of all computer animated people (teenagers?). Then the teenager drives a computer-animated 1962 Shelby Cobra with his non-existent "baby," and his eyes turn to radio dials to indicate horniness. Just then he is besieged by music notes, one of which screams, and a violin which morphs into him. Then he gets kicked in the balls by a pair of sexy legs in thigh high boots, which sends him flying hundreds of yards in the air.

Meanwhile at the netherworld Def Leppard concert, the lighting grid, which we are reminded was digitally designed, is apparently really getting into the spirit of the song, and a microphone whistles a cat call presumably to lead singer Joe Elliot as the computerized teen descends from his crotch kick. Spotlights merge on Phil Collen's (yes that is his name) solo, and he elevates above the stage, becomes (?) the teenager, ascends through the lighting grid, and runs down his familiar street. Back at the concert, Joe Elliot throws his microphone into a light, which melts onto a cymbal, and then he stomps on the stage which liquifies. All inanimate objects at the concert begin to dance. Zoom out to show how big this netherworld concert is, cut to the teenager playing the last notes on air guitar, and we're out.

Here's the thing about commercials. They're not really targeted at the buying public. They're actually targeted at the people in the marketing departments of huge corporations who have the power to decide to spend millions of dollars on an ad campaign. That's why all commercials have that cloying quality of mimickry where you're like, "Why the fuck is every insurance company whistling at me? Why is everything Zooey Deschanel? Why is every beer commercial just some guys with beards being mean to each other?" It's because the people who get to decide what to do with tens of millions of dollars are not creative people, and non-creative people in a position to influence creative people say things like "make it just exactly like that pre-existing thing, but different."

Creativity is a detriment to a career in eight figure spending. You don't get there if you see the world as anything other than a series of Matrix-like numbers.

Anyhow, that's why this Def Leppard video looks like a Diet Pepsi commercial where they're throwing in the whole kitchen sink just to see if anything sticks. They might as well have Shaq and Ray Charles out there doing the "Let's Get Rocked." I'm going with early-90's references only.

All of this sounds negative, so why did I previously say this thing is "GREAT"? 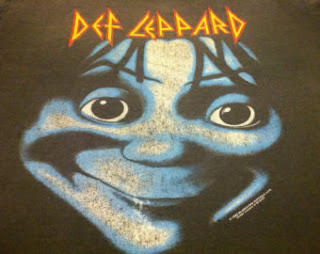 First, because rock and roll should be stupid, and this is supremely stupid. One of the worst things about "grunge" is it reintroduced the idea of "having something to say" into rock music. I would rather subject myself to five or six repeat listens of "Let's Get Rocked" and its vapid corporate-lackey message than sit through one song of Pearl Jam telling me to think about how a troubled childhood can lead to violence and if so who are the real victims etc. etc. and boo hoo hoo.

Second, it is rock music. I mean, there used to be such a thing as a hit that sounded like this. I looked up the charts for the month this single came out, and leading the way was "Save The Best For Last" by Vanessa Williams. "Sometimes the sun goes round the moon," you know, that song. Even if that's actually a better song than "Let's Get Rocked" (it is), having a hit rock single is and has always been a good thing. If for no other reason, for the future of rock. Think about the children, you guys.

Third, seven million people bought this album. That is astonishing. Like they knew it was going to be this, and then they were like "yeah, I'd pay money for that," and then they DID. Seven million people worth of alive human beings. That is crazy. What makes that great is that this song and accompanying video are dripping with desperation. They're trying everything. They're saying nothing. They're wearing spandex in 1992 and playing music that sounds like that, and it could not more obviously be a sadly irrelevant and empty shill job. But: it WORKED. Def Leppard and bigtime rock and roll get one last cash in. In their 30's no less. It's like something out of a movie where the old broken down guys get it together for one last big pyrrhic victory.

Sure, sales figures are a weak argument for cultural relevance. And yes, the song and accompanying video for "Let's Get Rocked" are embarrassing. But we are talking about Def Leppard here, and that is and always has been a dumb band. In retrospect it's impressive that a song this embarrassing is the band's last classic single rather than the effective end of their career as a non-nostalgia-based creative entity.

They waited until their next album to do that. With "Slang."

So that's the full reappraisal over twenty years later of a song I hated with a passion when I was twelve. I don't hate it anymore. I think it's awesome. Both "ha ha ha that's awesome" awesome and real awesome.

We'll keep in touch. I want to see if I have a similar reaction to Extreme's "Get The Funk Out" and Van Halen's "Poundcake."