Would Spending $200 For Nine Inch Nails Tickets Make Me a Retarded Person? 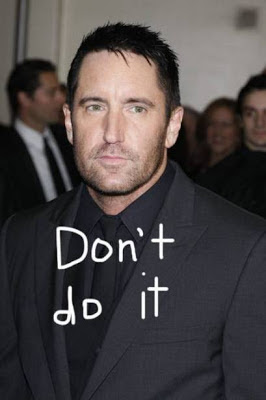 I am literally incapable of saving money. Like I can't do it. I am unable to do it. If I have $100, I will spend $100. If I find $20 on the street, I will spend it within 30 minutes. If I do somehow manage to save some of my paycheck, and then another paycheck comes along, creating this thing in my bank account where I actually have MORE than the amount that just came in, then I will spend almost all of it because I will feel as though I deserve a reward for having saved it in the first place. At present time, even though I'm "saving up" to move in with my girlfriend, even though I owe the IRS an amount of money that I try to not even think about, even though I owe my best penis friend $250 for SXSW housing (which, as you know, was several months ago), when I read on the internet that tickets for an upcoming Nine Inch Nails show were on sale, I was like "well, duh, I have to spend money on these, because it will be hilarious."

I have already seen Nine Inch Nails three times. The first time, Marilyn Manson opened for them and my young self thought that life could not get any better than it was in that venue, where I stood in a dirty, stained, thrift store wedding dress, cutting myself with a cheap cross I wore around my neck, which I had dramatically ripped off for the purpose of cutting myself. At that same show, my friend Yolanda's date, some random boy whose name I don't remember, hit on me constantly, causing Yolanda and I to have some manner of fight for a whole school week. I don't know. The second time I saw them, David Bowie opened for them, which was very depressing. I don't remember the third time at all because at that point I had discovered that I love to be drunk.

My favorite Trent Reznor memory is something that took place after the first concert I ever saw him perform at. My friend and I figured out where he parked his car by a back entrance of the venue, and waited there for two hours after the show to see him come out, in hopes of, I don't know, touching his ding dong or something. When he finally came out, he made a bee line for his silver Porche (barf) and we jumped up and down screaming "TRENT!!! TRENT!!!!" Trent looked up at us, flipped us the bird, and then got in his car and drove away. We loved it. What would we have done with his ding dong anyway? Nothing, that's what.

I'm thinking it would be good to buy these tickets to see Nine Inch Nails because the show is on October 14th, which is pretty close to the first time I kissed my girlfriend after our first date. (Insider info. Top secret stuff. We had our first kiss waaaaaaaay after hours in the VICE Brooklyn office, right after blasting a Barbara Streisand promo I had in my desk, and also after I dropped my work laptop on the hard tile floor because I was wasted. HAHAHAHAHA. That's what you get for giving me a keypad code).

Uncertain as to what to do about these tickets, I asked the internet: 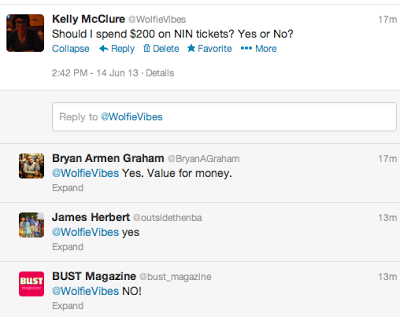 I'm on the fence about it, so I'm just gonna eat a microwave pizza and collect my thoughts. While I do that, maybe you'd like to see what Trent Reznor looks like now, if you don't already know. He looks like this: 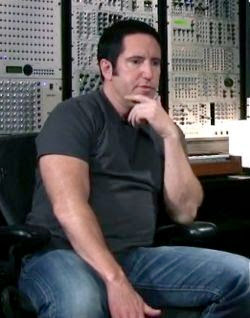