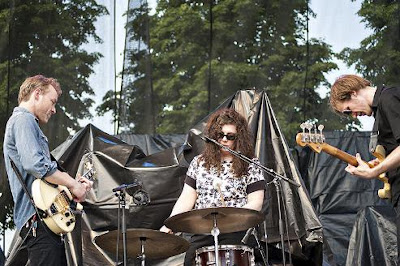 There’s been some furious internet byte-flinging about a show Low (that band named Low) played at a festival in Minneapolis this weekend. What they did is they played a single 27 minute song in blown-out drone fashion and then called it a day. Some of the people who paid money to go to this show were pissed off by this. I find that odd.

These people knew they were going to see that band Low, right? I’m not saying that like “Low always pulls crazy stunts like this.” I’m saying that like “how do you get all charged up for a band and then get all upset about a band failing to deliver when that band is Low?”

Were these festival-goers all experiencing depressive episodes? How can you possibly be disappointed by a Low concert? I thought the whole point of that band’s existence was to be the music of choice for people who are already in the throes of maximum disappointment. How do you even know the difference between a great Low show and a boring one? Aren’t they the same thing? If you want to go to see Low badly enough to actually go to see Low, they could punch you in the stomach and leave you in a ditch to die of internal bleeding and it would still count as a victory that you were capable of leaving the house.

I mean, I’m not all that familiar with the band. Do they have a hit single now? Some ironic thing they did that really took off on them in a bad way, like “Shiny Happy People” or “Tubthumping?” All I know about Low is that I had a roommate who was super into them once and that period of my life was hazy and ill-defined and probably would have felt a lot like the bottom of something if I could remember any of it. Anger was not an emotion I was experiencing a lot of back then. Anger is an emotion for motivated people who aren’t stewing in their own juices. Low and anger do not mix. That’s why it’s so strange that anybody could be pissed off about a thing they did.

These people expected Bruce Springsteen? Three hours of foot-stomping music with more enthusiasm than seems humanly possible? An extended “Tenth Avenue Freezout” transitioning seamlessly into an extended “The E Street Shuffle”? From Low? The band named “Low?” Don’t they know that band? They paid money to see them.

Oh, and also these people paid money to see Dan Deacon and also The Metrics and also Bob Mould and also Silversun Pickups. So these people are upset about 20% of their ticket price not living up to expectations. I don’t know how much those tickets cost, but if they were expensive enough for somebody to be pissed about getting stiffed for 20%, then they were too expensive for anybody to complain about. “Yeah, I paid $50,000 for my ticket, but I feel like I only got $40,000 worth of show” is a maybe valid complaint until it’s like why are you spending $50,000 on tickets to a Low plus other guy plus other guy plus other band plus other band concert.

And yeah, if it’s a regular not-Low band and they do a pretentious 27 minute drone-a-thon, the appropriate response is to roll your eyes and not like that band anymore. Unless it’s like a good pretentious 27 minute drone-a-thon, in which case you roll your eyes and like that band a little more than you used to. If the band in question is Low, I don’t know what you do about it when they pull an "art" move like that. Probably sigh so deeply you go into a coma.

It seems like I might be shitting on Low, here. I don’t mean to. I mean, yeah, but not more than usual. Not in particular. A band has a right to say “fuck you, we’re not what you want us to be, we’re this” to anybody who paid any price ever. And you deal with the consequences. In this case the consequences is extremely cool people like me are talking about you for maybe the first time in their lives. So, yeah, go for it. Good move, guys.