PEOPLE: NOTHING, INTERNET: NOTHING

Human beings are the worst. Have you looked out there recently? Have you seen the things we've done and are doing? In Turkey? I think there's something happening in Turkey. People are talking about it. I haven't seen it, but it sounds bad. I'm having a hard enough time without knowing what's going on in Turkey. Is it going to make me feel better? To know about the thing in Turkey? No?

But I need to know about it because I need to care what is happening in the world because if I don't care about Turkey and something bad happens to me nobody else in the world will care about it? What are we doing here, whole world OCD? We all worry about everything all the time and that will fix everything?

Worrying doesn't accomplish anything but making life slightly worse for everybody around you. If something bad happened to me, I wouldn't want it to ruin anybody's day in Turkey or anywhere else. But no, we've got to remain vigilant because something something, and if you don't you're a bad person because blah blah blah. How could you be so cruel as to not give a shit? Don't you see this baby's eyes? He lives in garbage and you don't care? You don't care about the world's garbage babies? GIVE ME MONEY.

Human beings are the worst.

Case in point: me. I am the worst.

My girlfriend and I went on a trip through the country recently and we stopped to look at some cows on the roadside. She was more happy and impressed by the existence of cows than I thought was warranted. "Cows are morons," I said, "all they do is just stand there and eat until somebody comes along and kills them."

"Stop. I don't like that," she said, "why do you have to be mean to the cows?" I got even more upset because why defend them, but she was right. I don't have to be mean to the cows. She was enjoying them, they were being cows, everything was fine until I showed up and started judging everything. Why can't anything be nice? They're cows. One of them is a baby. Don't you care about the baby cow? The precious, cute little cow baby? He's just a little guy.

No I don't. I don't care about cow babies or garbage babies, and by not caring about anything, nothing is either too good or too bad for me, and that's how I would prefer to think I like it. Except when it all creeps up on me and all that distance I've been putting between myself and everything else seems like a giant unbridgable chasm like that one scene in The Golden Child. When that happens, I usually just watch The Golden Child and then send out a mass text to see if anybody wants to play Scrabble. 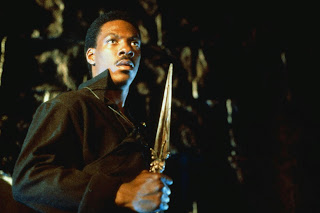 The internet is one of the worst things that humans have ever done. It shows us to us. I hate it. Because I am a human and I don't want to be the worst. But: I am a human, and I am an internet human, and that means I am the same as everybody and everything instead of different like how I wish I was, and that makes me sad.

Not that it's sad that I'm not different than you guys. I'm not saying that, you guys, it's just...

Don't get me wrong, you guys are great. You guys are great guys. And the garbage babies and the cow babies too. All great. Everybody's great. Humans are great. We are. We're the best. Everybody. Hooray for us. I'm sorry, it's just been a weird week for me. Yeah, no. I appreciate it but I don't drink. I'm gonna go home. Got The Golden Child on DVR. Yeah, ok, thanks. You too.

Let me know how that thing works out in Turkey.