Richard Ramirez Got Flushed Down the Shitter in the Sky. 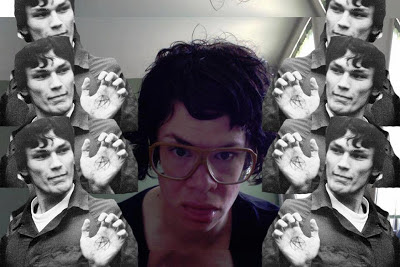 There is a saying that you'll come across often while reading things like O Magazine and Stephen King novels, and that saying is "There are no atheists in hell." As I understand it, atheists don't believe in hell, but Satan worshipers do, because they love Satan and that's where he lives. When Richard Ramirez was convicted of slaughtering something like 13 people in the mid-80s and carted off to prison, he said "see you in Disneyland." He's dead now. Disneyland is a very uncomfortable place to go, especially on a weekend, and I can pretty much see how it would be hell-esque. Richard Ramirez is in hell now. Or Disneyland. Either way, he's not here anymore.

Seems to be a pattern in my life where I learn about hot news topics while having a snack. I learned about Paris Jackson's suicide attempt while eating Doritos, and this morning I learned about Richard Ramirez dying in prison while eating pretzels. According to Huffington Post, he was moved from San Quentin's death row to a prison hospital, where he died from "liver failure." He was 53. In my mind "liver failure" translates to, "demons have been living inside of his body, slowing gnawing away at his organs for many years, and when they ran out of organs to eat and play with, they flushed him down the 'ol shitter in the sky."

Some people don't know who Richard Ramirez is, but I do because sometimes when people are trying to be mean to me on the internet, they'll say I look like him. I also know who he is because I lived with my parents in Southern California during his reign of spooky devil terror. He did his spooking around during 1984 and 1985. My parents and I moved from Chicago to Southern California in 1984. I was seven. The first house we lived in once arriving in California was a yellow house. The news said that Ramirez, known as "The Nightstalker" preferred to kill people in yellow houses. That could also not be true, and just something my Mom told me during her early stages of ruining my life.

Ramirez enjoyed breaking into people's homes after stalking them for a while to figure out what's what. He'd hide in the closet, wait for you to put your sweatpants on, and then leap out and fuck you up all over while saying devil stuff. The worst thing I've heard about him his that he broke into a home occupied by a married couple, killed the husband, and then raped the wife on the bed next to her husband's dead body. Can you imagine? In 1985 Ramirez was chased down and caught by residents in East LA while he was trying to steal a car. I would REALLY love to meet one of these men. I bet they have never stopped talking about it. What if Ryan Gosling caught the Nightstalker? I don't think he was born then, but if he had been, he would have done something about all this.

During my processing of the death of the Nightstalker, I also learned that he got married in prison to a 41-year-old freelance journalist. Of course he did. I mean, obviously.

Richard Ramirez killed a lot of people in gross ways and he's dead now. If I could draw I'd enjoy making a small comic book about him dying, going to hell, meeting Satan and being like "finally! I love your work!" And then Satan just  rolling his eyes in his face for an endless, endless, eternity of time.