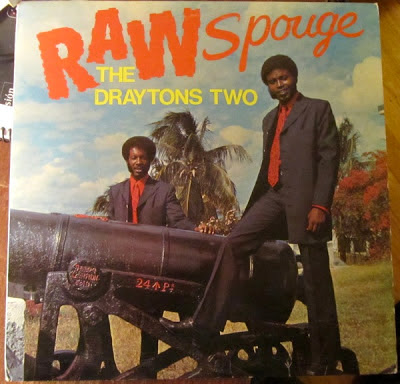 Yes, you're seeing that right. This is real. This is a thing that really happened. "Raw Spouge" is the name of something. Specifically: this thing. This 1973 album by Bajan (from Barbados) duo The Draytons Two. There they are, standing near a canon in matching suits. They have afros and sideburns and soul patches. They are perfect. Raw Spouge, you guys. Raw Spouge.

Of course there's a story. There's a reasonable explanation. I will tell you it, if you want. I will understand if you don't want an explanation. If you just want to stare at the above album cover in numb disbelief and let it wash over you for a minute, I don't blame you. It's mesmerizing.

"Oh yes, that's right, I am a human on the planet earth. Oh yeah, I remember. That is a tree. Those furry things are called dogs. I am a me. I am in the middle of a task of some kind. What was it? Reading a blog. I think I am doing something called reading a blog. This is called life. This is what I am doing. It feels different now, like maybe I'm different, but I remember this. Life. Okay. Let's do some of life now."

"Spouge" was a kind of abortive genre of Caribbean music started in Barbados in the 1960's by a guy who performed under the name Jackie Opel. I don't think he named the music style after ejaculate, but I don't know. Wikipedia doesn't say.

What is "Spouge" music? Basically it's calypso and ska together. It was a kind of analog forerunner to Soca music, which is hugely popular in the Caribbean today. What does Soca sound like? It sounds like this. Did you click on that link? Please. Do it. You will NOT regret it.

Spouge is okay, though. I mean, it's mildly tolerable. It's upbeat. You know, as pop-ambition world musics not influenced by drugs go. You could do worse than to put Raw Spouge on at a barbecue. Just FYI. If you want to slather your barbecue in Raw Spouge. I don't think your guests would object too much. Try it.