Beyonce Will Literally Slap You Back Until You Die. 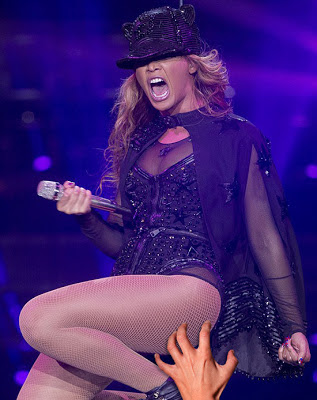 If you were to Google the words "Beyonce Ass Slap" you would learn, if you haven't already, that some guy thought it would be a good idea to smack Beyonce's ass (her holy, holy, sacred ass of the Lord, Amen) during her show in Denmark on Monday. She was in the middle of singing "Irreplaceable," bending down to touch the hands of the audience, when a man who I can only assume is 100% made of dried semen, bloated worms, and the tears of orphans dying of AIDS, had a fart bubble explode in his head, causing him to reach over and slap Beyonce's butt. There's a video of it and everything, which I have watched 50 times, each time with my hand over my face because it makes me want to kill myself.

The worst part about all of this, aside from everything, is that I didn't even know about it until my Total Bozo co-worker, Ben Johnson, emailed me about it this morning. Looking now, I can see that many major news sites/blogs have covered it, but why there wasn't a massive hot air balloon with the news painted on the side of it, or the releasing of missiles/bombs/doves into the sky outside of my apartment, alerting me to what had happened, is boggling to my mind.

Have you ever touched someone at a concert? Like, the performer I mean? I remember being at a Crosby, Stills, Nash, and Young concert with my parents when I was around 16, and my Mom begging me to reach my hand out to get a guitar pick from Stephen Stills and it was like she was asking me to shove my arm into a volcano. There was literally NO way. At present, I've interviewed almost every musician I would have ever wanted to, and the times in which we hugged or shook hands before or after the interview filled me with such nervous energy that I can still barely think about it. Can you imagine what manner of serial killer would slap a performer's ass? Let alone THE ass???

Just yesterday I was having a conversation about who was closest to the truest definition of "feminist," Beyonce or Rihanna. The conclusion was unanimous that while Rihanna is a strong, "bad ass" woman in her own right, Beyonce would just literally have a person killed if they wronged her. For instance: let's say Jay-Z were to ever pull a Chris Brown on Beyonce, I'm guessing that he would just never be seen or heard from again. Like the very force of the earth, the energy and molecules and unicorn dust that make all of us, and everything else, would just gather together and make him disappear.

Moral of the story: I guess you can just slap a woman's ass, regardless of how famous she is or isn't, and not much will happen to you. Because everything sucks and is horrible.

Moral of the story #2: I hope the Beyonce gropper knows that if he lived to be a million years old, he will never be anywhere near an ass that perfect again.

@WolfieVibes
Posted by Unknown at 2:48 PM