Talented 14-Year-Old Girl Doing a Van Halen Cover Looks Like a Bitch and Should Be Someone's Girlfriend. 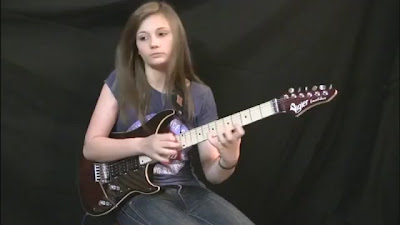 I have my own apartment in Brooklyn, NY. By "my own" I mean, It's mine. I'm the only one who lives here, aside from my cat, who is my friend. I'm so obsessed with how wonderful and rare of a thing this is that I clean my apartment, and everything in it, daily. You could deliver a baby in here. You could dust for fingerprints in here and find maybe three. Sometimes I sit at my desk chair and stare over to the baseboard on my right hand side where there's this flap of molding coming loose and think "I bet there's a bug in there." In my mind, this one little flap, this one minor imperfection, is a catch all for anything bad that could possibly ever find its way into my home. Sort of like how the Internet, in and of itself, is a flap in the universe where, if peeled back, every single horrible monster of a thing or person you could possibly imagine, ever is revealed. All just buzzing around, waiting to tell you that you look like a bitch slut French freak liar.

What you see up there is a home video of a 14-year-old girl awkwardly slaughtering a rendition of Van Halen's "Eruption." She looks just as comfortable playing guitar in this video as she would be taking a shit in front of her home room class, but she is without question very, very talented for her age, or any other age. From her Kohls jeans, to her cap-sleeve t-shirt, to her My Little Pony hairdo, to her friendship bracelet that she probably cares way more about that the person who gave it to her would have intended, she is a teenage girl. Watching this video almost has a smell. And that smell is of eight-hour old maxi pad. There is nothing wrong with this. She is perfect. She is exactly how she should be. She is better than you. She looks like a bitch.

That was the first comment that caught my eye after breaking the #1 golden rule of the Internet: Don't read the comments. Someone out there in the flap watched this video of a young girl playing a guitar very well, and then signed into their Youtube account to leave the comment "Girl looks like a bitch." The process of doing this probably took longer than the minute and some odd seconds it took to watch the video itself. Why would someone do this? There's a simple answer, and it's the same answer that can be given to many of life's other questions, and it's: "Because 99% of the world's population is both physically and mentally retarded." But not this girl. Not Tina. And that makes her, obviously, a fat fucking ugly slut.

When I was 14 I was listening to The Cure and daydreaming about being a werewolf or a vampire. When I was 14 I ate my first vagina, and it belonged to a red head. Can you imagine how scary that was for me? Well it wasn't. Because I was disgusting. When I was 14 I rubbed baby oil in my poofy, curly hair to try to make it straighter, even though it could never, will never, should never be. I was weird and gross and loud and you wouldn't have wanted me to be your girlfriend. I wouldn't have given a fuck. Tina doesn't give a fuck either. She doesn't have to perform for you. She's busy.