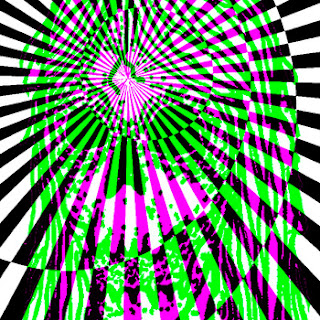 "Current favorite band" is a title that's always up for grabs. It doesn't take much to change it. You could wake up in the morning and feel really ABBA-ish. If so, you are probably going to have a great day because the "ABBA is my current favorite band" mindset where you don't actually mind "Waterloo" is an especially peaceful one. It can't last long. If your life is anything like mine, you get a maximum of 45 minutes out of the house until somebody is an asshole to you and ABBA can't be your current favorite band anymore because your heart is full of murder.

My current favorite band is Zig Zags because of this tape.

This is a bit odd, since the tape came out a couple of months ago and it contains older material, including two 7"es I already own and some demo stuff I didn't own but which are even older than the 7"es. The most recent recorded Zig Zags material, "Runaway," which is their 1 minute 45 second contribution to a split 7", isn't on the tape. And they're probably working on something else as we speak that I don't know about. And it's probably so awesome it'll make me feel like an grade-A dummy for big upping this tape.

But, you know, fuck it. I can change my mind. It's "current favorite band." Zig Zags are my current favorite band. Just because. It's summer. I've got this little sucker set to full blast in my shitty 2000 Jetta with the tape deck and the one dim headlight and the gunky floor mats covered in a ton of empty cartons of my brother's weird Black & Tan cigarillos. It sounds good coming out of whatever speakers are currently operational. I think I'm down to two and a half at this point. It gets a sonic A+ for not ever having anything in that one frequency range that makes the front right woofer sound like somebody's doing a 50-50 grind around my cochlea.

I like a few other things about it: 1. it rips; 2. each track is different but still good, and the demos indicate a band figuring itself out and also having fun while excelling in multiple different modes; 3. it works great as an album even with mostly chronological sequencing; 4. I scored a copy of it, which is not gonna be an easy thing to do if they keep this shit up; because, 5. it fucking RIPS. The Zig Zags bandcamp says they still have a few copies, but the source at Burger Records is sold out. Run and go get this unless you're an idiot. Sorry if that's chickenshit journalism, but whatever. I'm not above substanceless hype of things that are actually good.

I don't know if it'll be a nightmare of licensing what with the 7"es being on other labels, but I'd love to see this thing on wax. Press it up, guys. Find a way.