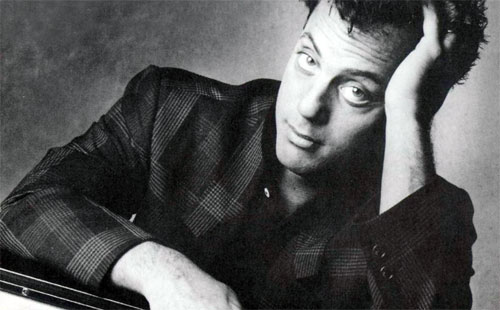 I’m a Joel Man. Okay? Is that okay with you guys?

Look, everybody has an artist who they liked, then joke liked, then joke loved, then real loved. I’m a Joel Man. To me there’s not a better album A-side than the murderer’s row of  “Big Shot” “Honesty” “My Life” and “Zanzibar” to lead off 52nd Street. That is a real opinion that I have really thought of before, and probably will again the next time I listen to 52nd Street, which I DO SOMETIMES. Do I have your permission to be this way? The way that I AM? Good, because I don’t care. I do not care, okay?

Billy Joel is, essentially, horrific. I know this. My brain knows this. I’ve heard “A Matter of Trust.” I’ve been subjected to “Uptown Girl.” I can watch footage of 80’s Billy Joel prancing around in a grey sharkskin suit with enormous white high tops and excessive hair gel with no sideburns, sweating cocaine, and have the same impulse to laugh and roll my eyes as the next human. But no matter how awful it gets I can’t bring myself to dislike what is happening. I’m a Joel Man.

I can’t tell you how many times I’ve had “I Go To Extremes” pop in my head as a soothing personal mantra during a fight with my girlfriend. I DO go to extremes. Too high or too low, there ain’t no in betweens. Billy Joel understands me. He’s not going to sling around a bunch of fancy talk about “manic depression” and “you need to see a therapist about this problem, it is destroying all of your relationships.” He just tells it like it is. I don’t know why I go to extremes either, Billy. You and I are the same.

I was at the record store the other day, and they had a copy of River of Dreams on vinyl for $30. They didn’t press many vinyl copies of major label releases back in the 90’s. River of Dreams is a rare find. All the people who bought the LP haven’t died yet. It is probably the last great Billy Joel album, by which I mean it is the most recent Billy Joel pop album. I don’t know how to explain to you people how tempted I was to spend $30 on this thing despite knowing that it has River of Dreams on it. I’m a Joel Man. Let me repeat this: I was TEMPTED to spend $30 for a vinyl copy of BILLY JOEL’S 1993 album RIVER OF DREAMS.

I did not buy it. I knew I would put it on and hear the title track and think “WHY.” WHY AM I A JOEL MAN. Couldn’t I be a Boss Guy, or a Mellencamper, or a Petty Dude? Any of those would carry less social stigma than Joel Man. Being a Joel Man is often a burden. I’m not proud of it. I’m not even glad there are other Joel Men and Joel Sisters out there for me to commiserate with. There shouldn’t be a Joel Anybody. But that’s naïve. I exist. I’m a Joel Man, okay? I share a collective struggle with others. Our community gives us strength, even though it springs from shame. Like an AA meeting. You don’t want to have to be there, but since you do, this is the best place for you to be. My name is Ben, and I’m a Joel Man. I almost bought River of Dreams for $30 the other day.