Dispatches From The Pre-Internet Internet 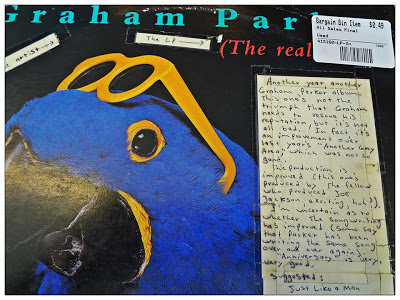 The above image of a post-it note album review attached to a Graham Parker The Real Macaw LP was shared, unleashed really, from the Dusty Groove Facebook page today, and it’s been sticking like a splinter in my frontal lobe ever since.

Doug at Dusty Groove, which is a great record store and general knowledge repository resource for music along the soul/funk/jazz/hip hop/sample hunting spectrum, theorizes that this may have been an old radio station copy and the note functioned as banter fodder and guidance for DJs from a friendly and engaged program director. Using my eyeballs and my brain and scanning for context clues, his story checks out.

The idea of a “radio” station with a physical library of physical LP’s and a physical human program director providing physical human DJ’s with actual information via physically written notes is hopelessly quaint. I imagine visiting a radio station now is like walking inside a giant iPod. You’re greeted warmly by a hologram of Steve Jobs, and just after his friendly message of welcome creepily glitches into repetition, heretofore unseen robotic clamp arms surge through the hologram’s forehead and rip your guts out to see what genre you are and how many beats per minute you provide. Is what I imagine happens. That’s just the feeling I get from occasionally listening to commercial radio.

Anyhow, as nice and as sweet and as old-fashioned and cutely ineffectual as it is to imagine a radio station programming director once upon a time warning his or her employees about the inherent unevenness of post-Squeezing Out Sparks Graham Parker (with the exception of “Anniversary”—how frightfully early-80’s AOR), it’s better to imagine the above capsule review as having been written by an aspiring critic for unintentionally personal use. Some grump in a basement who is tired of shelling out dough for Graham Parker's latest LP and wants the world to know it, except he also hates the world and doesn't want to interact with it ever. So he just writes reviews on his own LP's so people will know how he felt on the subject after he dies and Dusty Groove is bidding on his old collection. That's my preferred fantasy about this Graham Parker The Real Macaw LP.

My first reaction to seeing it was, “Hey! That’s what I do sometimes.”

And it’s true. I do that. I write down my thoughts about an album because I like having them. They’re my little thought-babies and I just love them oh so much. Sure, I don’t write my thoughts on post-it notes and then scotch tape them to a Graham Parker The Real Macaw LP, but hey. Different stokes for different obsessive weirdos. I have the internet now. I’m writing this instead, and I get to pretend there’s such a thing as a “you” at the end of it, and hopefully “you” are not Doug at Dusty Groove in 30 years saying, “That’s hilarious, let’s put it on Facebook.”

I’m paraphrasing Doug. That’s what I would have said if I was Doug.

Nobody ever respects the power pop guys. If you’re an ambitious songwriter who wants to be taken seriously as a craftsman and an artist, do yourself a favor and never ever do a power pop single. Graham Parker. Joe Jackson. Warren Zevon. Man, those guys. They drove themselves half crazy in a bid for legitimacy that nobody except for a certain hardcore base of people with songwriting chops hangups ever wanted to give them. Making a name for yourself with a big fun power pop single and then trying to switch gears to goopy sentimental ballads for the grown-up set is like Steve Urkel trying to be a serious actor. Maybe you could do Summer Stock, but forget about going bigtime with it. Only Elvis Costello made it out alive, and only because he distanced himself from his early material as if it was some horrific collision of accidental timeliness rather than the best thing he’s ever done.

This is as it should be, by the way. Power pop and “I am an artist” do not and should not mix. You can’t blend the two concepts into one career without being disingenuous about one of them. Is what I think. Often. Sometimes.

I had that thought.

Maybe you’ll find it later in the internet-content bargain bin. Not some of my best work, but the Steve Jobs hologram was pretty funny.

Recommended: “Inconsistencies in the ALF Mythology”