I Was An Undead Wu-Tang Sex Druid 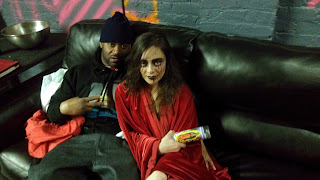 Last Friday night I had the opportunity to dress as a mystical Druid priestess with four crazy fun ladies (Kelsie, Carley, Nicole, Elisa) to raise Ghostface Killah from the dead during his show. Afterward when a kid covered head to toe in Wu Wear asked two of us afterward how we got the job we just said 'I don't know - magic'. We weren't lying.

Every town they are in they find 5 women to wear red robes, hold candles and paint their faces like the undead and surround GFK in a velvet throne where he raps from a velvet book. The robes were slippery and the female vocalist from his band helped us suit up in the green room before the show. 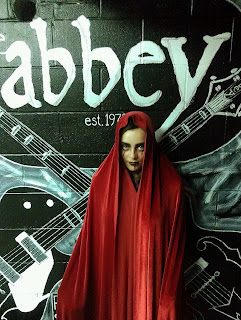 I know you are wondering, what goes on backstage at a GFK show?
A lot and a lot of nothing. Here is a portrait of what happened told through what I learned:

It's important to maintain a healthy curiosity about the natural world. I watched Killah Priest contemplate the banana he was eating and then ponder aloud  where the banana stores its seeds.

KNOW YOUR LIMITS. If you succeed in sneaking backstage to take pictures don't push it. Choose between drinking all of Ghostface's Courvoisier OR finger blasting your girlfriend when you think no one is looking. Don't do both or you will get yelled at, thrown out and banned. And a room of people will watch you disentangle.

It is important to be balanced. You can travel with a chocolatier but you also need a tour manager who makes sure there's a big kale salad waiting for you after your show because even famous rappers need their vitamins.

And sometimes, when the stairs are rickety and treacherous, you might need to reach out for a helping hand to get you down. 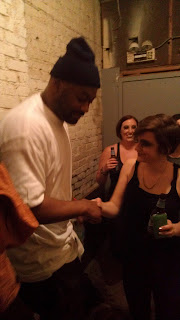 When our part was done I stood in the wings watching C*R*E*A*M enjoying the Wu Tang Clan as the goddess intended. Covered in fake blood and surrounded by real smoke. 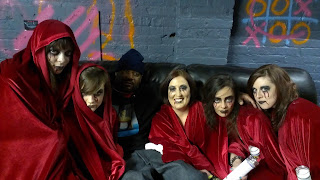 Irene is a guest contributor to TOTAL BOZO. This post appears here courtesy of  www.irenemarquette.com and irenechicago.tumblr.com. Follow her on whatever medium you prefer. She is awesome.
Posted by Irene at 10:48 AM