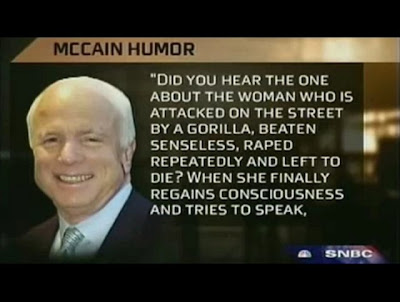 So you’re a fledgling or fully professional stand-up comedian. Congratulations! You have chosen a very unrewarding path for yourself wherein you expose yourself to nightly humiliation in order to hone your ability to tell jokes to drunk people, and the best case scenario for you involves continuing to do so until you die. Why have you done this? Seriously, why have you done this? Why.

Hey, rape jokes are a thing. Jokes about rape. Rape? The soul-shattering process by which one person forsakes their own humanity by overpowering another human, using them sexually, and discarding them without regard for their feelings, wishes, or essential right as a sentient being to be treated as something more dignified than an available orifice. Rape.

Joking about that is a thing you could do. Like, hey, that guy hanging out in Burger King all day looks rapey. Like he might want to rape somebody. Ha ha ha. You guys know what I’m talking about. You’ve been to Burger King.

Maybe the people who don't like rape jokes are just one of these naïve idealists who don’t like the fact that rape exists. You know, one of these tree-hugging hippies for whom even talking about the process by which a person is forcibly penetrated is considered “not a great way to spend an evening.” What are you guys, the No Fun Nazis? Seriously. These people are like the Nazis except for not having fun.

Man, it is totally unfair when people in the audience don’t like a joke you made simply because for whatever reason they don’t like a joke you made. Can’t they be more sensitive to you and your situation? About how, by voluntary choice, you decided you want to make a living by standing in front of people and telling them what you think about everything? Can’t the people in the audience be more cognizant of how much work you did in order to excel at this chosen field?

You spent your entire 20’s hanging out at open mics. Doesn’t anybody appreciate that? Open mics are a HORRIBLE way to spend an evening, and you went to them, diligently, for A DECADE. Couldn’t these fucking clods be more considerate of that? “Oh, boo hoo hoo, the comedian told a joke about rape and it ruined my evening because my sister was raped and murdered last month.” GROW UP. That’s supposed to make a difference? Please. When you’re a comedian, your whole LIFESTYLE is an unending series of ruined evenings.

It’s fucking censorship, man, is what it is.

These pigfuckers don’t know what it’s like to be an artist. They just sit there all day, typing away at their little desks, working on marketing proposals for a new line of ultrasound heart monitors, or updating the human resources database for a varnish manufacturing company, okay? Their lives are dreary and uniform, and their hopes and dreams are small and tangible and attainable. Food and shelter and clothing for their children. A lifetime of work at a job they’re good at in order to provide an opportunity for their family to thrive generations into the future. Maybe some laughs in the meantime so life doesn’t get too serious. That's what they care about. Bullshit like that.

And then they go out at night and think they have the right to tell you what to say after they paid you to tell them whatever you want to say? Well they don’t, and if they don’t like it, too bad. They don’t have the balls or the talent or the interest or the emotional problems to be a comedian. Therefore they don’t matter.

Except: the bastards can decide not to see you perform because they heard on the internet that you’re that rape joke guy, and they can leave nasty YouTube comments on your artwork and they can hurt your feelings and they can plunge deep into that bottomless pit of despair in your soul that caused you to become a comedian in the first place and they can rip the wiring even further loose by telling you that they don’t like you or a thing you did.

It’s unfair. The power they have. And they didn’t even spend ten years in dingy sports bars which periodically staved off bankruptcy by inviting comedians in to tell each other unfunny dick jokes in four minute chunks of wasted lifetimes. These paying audience members didn’t earn ANYTHING.

And the worst thing is, they will actually laugh at a rape joke if it’s a “good” rape joke. I mean, what the fuck, right?

Don’t worry guys, here’s a handy kit to help you write and perform a rape joke without igniting the ire of the No Fun Nazis. It’s a simple three step process.

It will negatively impact your credibility with an audience if you make a joke about rape while raping. This is kind of a no brainer. But did you know this: even if you raped somebody like TWO years ago, it’s still considered poor taste for you to make a joke about rape, or even for you to make jokes about things that aren’t rape, or furthermore to continue to breathe. Hey, that’s audiences for you. You have to be likable, and raping isn’t likable.

This kind of follows from step one. It might seem like after not raping anybody for your whole life you’d get a free pass to go ahead and crack wise about the violent sexualized negation of free will which is arguably a worse thing to do to somebody than kill them. Nope. Turns out you also have to appear not to condone the act of rape. You can choose literally any reason not to condone rape.

Even if you’re like “I don’t condone the act of rape, because from a practical standpoint you could just kill the victim instead and there will be less evidence of the act of murder than if you had also raped them,” the audience’s response would be less like “this guy is an asshole who I hate and I want to kick his ass after the show” and more like “this guy is creepy as fuck but I will tolerate him uneasily because I am scared to be in the same room as him.” It’s a subtle but meaningful upgrade in your relationship with the audience, and all you have to do is impress upon them that you don’t think people should rape other people.

STEP THREE: Be careful about sarcasm.

Oh man, sarcasm is the best, right? It’s like you say one thing but you really mean the opposite of that thing by using a device of emphasis which conveys a lack of enthusiasm on the subject. Like if I say, “Oh yeah RIGHT” to my buddy after he claims to have a million dollar idea, what I’m really conveying is skepticism and a lack of enthusiasm for his idea, even though I just said “Oh yeah RIGHT.” That’s what sarcasm does.

But even if you say “I think rape is just the BEES KNEES” in a really obviously sarcastic way, people might still get kind of put off because A. you brought it up, and they were just chugging along in their lives probably not thinking about rape until you mentioned it, and B. using sarcasm to indicate a lack of enthusiasm for rape using the same tone commonly employed to indicate a lack of enthusiasm for the band Red Hot Chili Peppers is maybe not as strong a condemnation as some people would prefer.

Some people take not liking rape more seriously than they take not liking skinny jeans, and sometimes they put that baggage on you. It’s like, “Oh GREAT, people expect me to be genuine about not thinking rape is okay, that’s EXACTLY what I NEED.” You know? Like GET A LIFE.

And now you’re home free! All you have to do is follow those three simple steps, and you’ll be on your way to rape joke paradise! Imagine never having to write a joke that’s not about rape ever again! What freedom you must feel at this moment. I am envious of you. I am almost so envious of you that part of me even wants your shitty life where you sit around in clubs at midnight on a Wednesday and eat an order of fries for dinner because you can’t afford the hummus plate. Good luck, you fucking idiot weirdo.