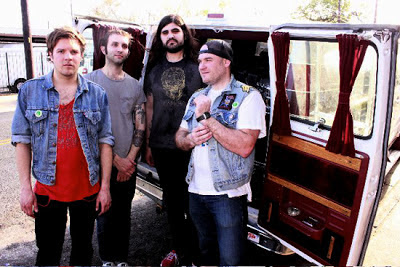 Everybody has a local band they’re rooting for. Local band you’re rooting for is a genre unto itself. The idea is please let this band I enjoy put it all together and be as maximum good as possible, so that as many people as possible notice this band is good and decide this town might be a good place to not suck, and those people will start other good bands, and those bands will play, and I’ll have something fun to do every night, and in 20 years a documentary crew will ask me about what it was like just to be alive in this time and place, instead of the way it is now, which is just a regular shitty life in a regular shitty town. Save me, local band. Make my life better. Help us, local band.

You might have noticed that this completely normal human impulse of seeking transformation through the power of music is a pretty huge load of baggage to put on four dudes with guitars and a drum kit. But that’s how things work. Fans tend to fixate. They pick a thing they know they like, and then they burden that thing with their expectations.

Why don’t they just think for themselves? Why don’t they go investigate every interesting new permutation that their given shitty town is currently bouncing off the walls of the obscure loft parties in its experimentalist shadow scene? Why don’t they start up their own bands if they want transformation so badly? Because. Just because. This way is easier.

Upon what local band do these fans fixate? Always on that which they can most easily understand. If a band is ONE THING, the locals will get stirred up. They will call it the best rock band in town, and they will be right.

For me, in Chicago, that band has been Heavy Times. Until recently. Apparently they just got in a fight on stage and broke up during a set up in Milwaukee, and confirmed it through the Chicago Reader’s Gossip Wolf column, which is about as serious of an official statement as can be for a band like Heavy Times. Have you heard of that band? Heavy Times? Maybe you have. Anyhow, they’re this band. They’re probably the best rock band in Chicago. They wear jean jackets and drink beer and play loud yet comprehensible rock music. They’re supposed to fix everything. They broke up. Maybe.

Why did they break up? Who gives a shit. Probably somebody is an asshole, and probably somebody is a baby, and probably everybody took themselves too seriously because probably everybody was drunk and/or high at the time. Definitely being in a band is not always fun. Certainly being in Milwaukee when you don’t want to be is not great. Were there lingering tensions about who’s collaborating with who and how much and who’s impossible to deal with and who’s the one doing all the work and who’s the one writing all the songs anyway and etcetera? Yes. It’s a band. That’s what bands are.

Is it a shame that Heavy Times are apparently no more? I think so. I mean, none of the guys died or anything. That would be a much bigger shame. But there’s also the shame of the unrealized potential for more and better music. This is a kickass band that contributed some criminally underrated songs (“Poison Ivy” and “Ice Age” spring immediately to mind) to the rock canon. If they could get their shit together, they could absolutely be in the conversation of best rock bands in America. But maybe if they got their shit together, they wouldn’t be Heavy Times. That’s how it is sometimes.

Anyhow, it looks like Chicago’s either going to have to get back to work, or else unfairly pin our hopes on somebody else. Bare Mutants, maybe. Radar Eyes? Maybe Radar Eyes if they can come up with anything as good as “Shake” ever again, which is not looking likely (in no way an insult, "Shake" is a MONSTER). Oh well. Back to the drawing board. Hey, rest of country: Chicago is open for business. Just FYI. We’re like New York except we have grocery stores and friends who have a car and you can rent an apartment here for less than $1,000 as long as you don't mind living next to a crumbling shoe warehouse.

Here's some vintage Heavy Times. Just keep on bippin' and a boppin', you guys:

@itisbenjo
Posted by Ben Johnson at 11:52 AM