Why Did I Do This Report: Tracy Morgan at the Pabst Theater, Milwaukee 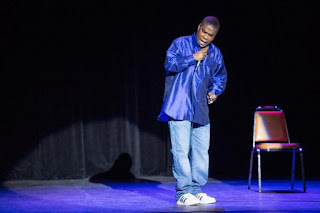 Morgan has been getting some flack recently for his material. There was some hullabaloo as a result of his performance a couple of weeks ago at the Mebourne International Comedy Festival in Australia. Some people “stormed out” and called for boycotts of future appearances, citing misogyny. There is misogyny in Tracy Morgan’s act. There is plenty of misogyny. There is also excessive vulgarity and shudder-inducing raunchiness and generally clumsy stagecraft.

If you only know Morgan from his role on 30 Rock, his live performance will likely come as a shock that is not so much nasty and sharp as it is the cumulative psychic result of a prolonged bludgeoning. But: taking anything from his act as a failure of the social contract is a serious misunderstanding of context. When the crazy guy on the bus starts yelling the C-word, you don’t respond with a doctoral thesis on power imbalance and gender politics. You just quietly scooch away from him. So it should be with Tracy Morgan. He’s not really cause for alarm. Nobody who might otherwise have any hope of functioning in the world is going to listen to Tracy Morgan and think, “You know, that guy is making a lot of sense.”

His act is loaded with horrific “laugh to keep from gagging” and sexually antagonistic moments, such as his vivid description of anal sex with an elderly woman. He often fails to contextualize, reign in, and/or protect his most risqué stuff, instead careening back and forth from loosely-defined bits like a man lazily obligating a contract. Towards the tail end of his set, he showed off his surprisingly deft singing voice, doing vocal impressions of various pop singers without really giving any reason for it. Tracy Morgan can sing like Michael Jackson. And Michael McDonald. And Meatloaf. In case you’re into that kind of thing. If not, well, he can just as easily use the term “discharge” for the 9th time and see if that works. Whatever it takes.

Adding to the chaos at the Pabst Theater in Milwaukee was the crowd itself, which included the regular Milwaukee percentage of people who’d spent the day (Cinco de Mayo) drinking until they became nonhuman. They did not so much heckle as blurt their ids. One woman, if you could call her that instead of the more accurate “living issue,” walked up to the stage to expose her breasts to Morgan. Twice. Once before and once after he did the bit about making women gag on his penis and then treating them to a new television set at Best Buy. "Wooo," this woman responded, repeatedly, "that's me!" This was a reminder that Milwaukee is a city that, on the level of infrastructure, actually solves its problems with beer. Tracy Morgan did not bat an eye in this environment. He was more than willing to feed the bears.

His attitude seems to be, “fuck it, I’m getting paid,” which is actually his greatest virtue as a performer. He could not more clearly not care. Given the material and delivery, it would present storm-out worthy issues if he appeared to give one fuck whatsoever. Is that his game? Is he crazy like a fox? Is he actually trying his hardest? Is the idea to expose people to the worst things he can possibly think of, and trick us into laughing (oh yeah, I was laughing; it was a partially defensive reaction, but I was laughing; the guy is still Tracy Morgan--how seriously can you take him?) by being ridiculous and shambolic and ineffably Tracy Morgan?

Is he even joking? How much is he joking? Is the joke “I have had these thoughts” or “What if I believed in these thoughts with every fiber of my being”? What if he DOES believe in those thoughts with every fiber of his being? What fibers of what being believe in these thoughts of his? What’s the joke and who is it on? The man is a comedic enigma. Is he a secret genius? A brilliant deconstructionist? Very probably not, but his motives as an artist are opaque enough to leave the possibility open. You could even defend him that way if you wanted to be insufferable. Tracy Morgan is a difficult man to interpret. But not THAT difficult. At a certain point, a dick joke is a dick joke.

I think it’s most probable that he is just a guy who was born and/or developed into somebody hilariously but clownishly funny, due more to absurd environmental stresses than a passion for comedy.  I think that due to who he is, he’s made a very lucrative career as a comedic actor with the rare gift of rendering almost any line of dialogue, no matter how outlandish, both plausible and funny. The Tracy Jordan character on 30 Rock could say anything and sound like he meant it, which to the writing staff must have been like manna from heaven. One episode featured Morgan literally reading from the phone book and being hilarious.

These otherworldly skills flow through Tracy Morgan at a core level of self. But it’s hard to be a clown for a living and also be a man, and I think with this material he’s exercising his right, at age 44, not to be cute. It’s a shame, because he can do anything and be funny, and the material in his live act might actually be the least funny thing possible. When the chuckles break through he doesn’t even get artist points for degree of difficulty, because he’s not trying hard enough to be artful about it. I want to let him off the hook and say “well maybe that’s just who he is,” but if so then he’s revulsive AND ridiculous, and probably also tormented. When you see what Tracy Morgan does on stage, you know this about the Australian protestors: they weren’t protesting his material so much as they were protesting his existence. Maybe he is too.