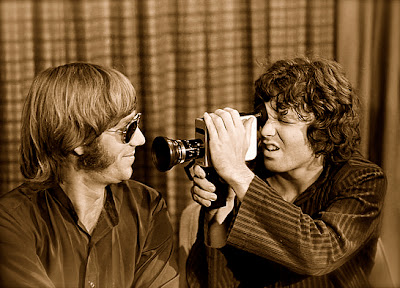 I don’t often share the fact that I’m not too distantly related to Jim Morrison, and when I do I feel weird about it. But: it’s a fact. Jim Morrison was my Mom’s second cousin. I found this out when I inexplicably got a Doors t-shirt for my birthday in December of 1990 from my extremely southern Grandmother Peanut of all people. I think she wanted me to get into genealogy.

Instead I got into The Doors, and very nearly, if I hadn’t been too smart to think The Doors were all that cool of a band even at the tender age of eleven, drugs. But: I listened to all the records and read all the books, even including some of Morrison’s awful poetry. The result is I know a lot about The Doors. I probably know more about The Doors than I know about any other rock group, even though they are something like my 90th favorite band. And they only rank that high because the dude is my cousin.

Ray Manzarek died today. He had bile duct cancer. It’s a sad day. Based on everything I’ve read about him, he seemed like a nice guy. He was a good musician, too. Ray’s an underrated reason why people today talk about The Doors more often than they talk about Herman’s Hermits or The Dave Clark Five. Morrison’s dark charisma is of course the biggest reason the band achieved greater notoriety than those other 60’s pop groups, but from a sonic perspective they also put the organ front and center and had a guy in Ray Manzarek that actually knew how to play it. So what if he was proto-Rick Wakeman. He had no way of knowing that.

When you listen to a Doors song, you know it’s a Doors song, and Manzarek’s Hammond is probably the first thing you notice. Aside from the yelping and growling on deeper album cuts, Morrison was no great shakes as a vocalist. His lyrics are either great or weirdly submoronic, depending on who you ask (there’s a special kind of dumb reserved for that which purports to be enlightened). Morrison’s main contribution to the annals of rock was his theatricality as a live performer, where he was able during his brief tenure to bend time and space to his unwholesome whim like few before or since (Nick Cave and Alan Vega come to mind). But. Manzarek’s organ was the musical hook that brought the average teenybopper  into the arena of live performance, where Morrison had his way with them. Without that lilting organ on “Light My Fire,” there wouldn’t be a crowd for Morrison to psycholigize and/or show his dick to.

Were The Doors a great band? Probably not. But they were probably the best possible band that a band like The Doors could have been. Probably to a degree which is incredible given the likelihood of its constituent parts not to amount to much. As a theatrical enterprise, The Doors explored territory that no previous band had explored, which made them bigger than they actually were, and this happened almost totally by an accident of alchemy. With another front man they would have been less interesting but possibly more solidly themselves from a musical perspective, presenting kind of a more unified Moody Blues vibe. With a lesser organist they might have been a more hip band to reference, but nobody eulogizes the guy who played organ for The Seeds.

If in the wake of this sad news about Ray Manzarek you find yourself caught up in a reappraisal of The Doors’ music, remind yourself of this: no matter how much you might prefer to ignore the fact, the world needs Ray Manzareks. Somebody has to set the stage for greatness. Also: his subtle, thankless vamping probably kept more than a few venues from rioting while Morrison was backstage puking acid tabs into a gypsy’s butthole, or whatever it was he was doing in Cleveland in 1969. Who knows. Ray Manzarek might have saved lives simply by being a mellow dude.

Rest In Peace, Ray Manzarek. May you noodle calmly forever in heaven.