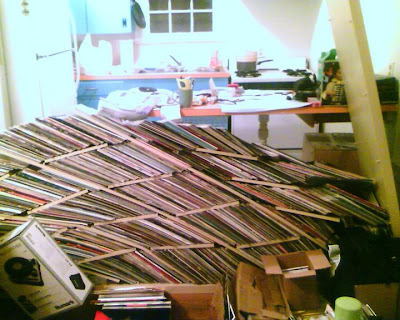 The #CratesAreEmpty hashtag, tweeted from the Numero Group twitter earlier today, got my juices flowing. It’s appropriate. All crates in every Thrift Store and Antique Mall have been dug. America’s gold rush of record hunting is over. I can tell you this. I’ve been out there. I just spent a long weekend in Iowa of all paces. The Crates Are Empty. #CratesAreEmpty.

Well, not empty. Full, still, really. Full of junk. Montovani. Guy Lombardo. Golden goodies of gentle strings for people who hate music only a little less than they hate silence. Theme From A Summer Place Where Korean War PTSD Cannot Touch Us. The millions and millions and billions of records that somebody made once upon a time back when a record was the only way to hear anything. The crates will never actually be empty. Only bereft of value. Forever. #CratesAreEmpty.

The internet killed the moth-ridden weirdo with bad teeth who will give you that pristine original pressing of Relatively Clean Rivers for “prolly fifty cents” after a squinting appraisal you have to pokerface your way through as your heart kicks like a rodeo bull in your chest. Gone is the thrill of the hunt. The acres of Boring Strings Of The World LPs are now punctuated, find-wise, with occasional scratched-to-shit 70’s re-pressings of  Meet The Beatles with $30 price tags even though they’re in a mildewed cardboard box sitting in a 19th century oven in a barn full of antiques in Buttfucknowhere, Nebraska. You pull them out and check the condition and your inner monologue screams "who is this FOR?!" while doing the Platoon pose, and then you get back into the car, empty-handed, and you tell yourself Never Again. #CratesAreEmpty.

The best you can hope for these days is a decent record in horrible condition with a ludicrous price tag. It’s as if Paul Revere himself (of Paul Revere & the Raiders) rode through the countryside declaring that The City Idiots would from now on and forever be buying any record in any condition for twenty bucks minimum, and run go get your pricing gun. “That copy of Led Zeppelin II your son used as a microwavable burrito plate might be worth something! Look it up on eBay!” The word is out about records. In a major way. The mothy toothies are getting their revenge. #CratesAreEmpty.

Many, many people have asked recently if cassettes are the new vinyl. If by “the new vinyl” you mean “an analog format to buy an album in that’s cheap because nobody gives or ever will give a shit about it,” then yes. Vinyl used to be like that. Everything was a dollar, tops. The good old days. They are gone. #CratesAreEmpty.

If by “the new vinyl” you mean “an analog format which will make a huge resurgence, with rare and collectible titles becoming insanely valuable and tapes become the en vogue way to listen to music,” probably not. I don’t know. I mean, I buy cassette tapes. I have a tape player in my shitty ass car. And I bought a tape player for my stereo so I could make tapes for my shitty ass car. So I can also listen to tapes in the house. And: I’m the fucking coolest. So maybe tapes will have a big resurgence. But probably not. They’re tapes. Tapes suck. Except for that Zig Zags tape. And all the other Burger Records tapes. And the Pussy Galore “Exile on Main Street” tape. And... oh shit. Now I have to go back to all the places I've ever been and look for tapes. This is a sickness. #CratesAreEmptyEvenForTapesInFiveYears.

I recommend you don’t go out there. Just go to your local record store and pay the $20 for whatever deluxe reissue they’re getting that week. I repeat: do not go out there. Please. I plan on going out there, so please do me a favor and don’t. You’re in my way. You’re being loudly nostalgic about Pat Benetar because you’re bored and idly flipping through the LP’s in this Salvation Army, and when you "can't believe it," that is my LIFE you're talking about so flippantly, and you’re in my way. Move. You’re standing in front of my crates. I don’t plan on finding anything in them, but I’m going to take a look just in case. #CratesAreEmpty.